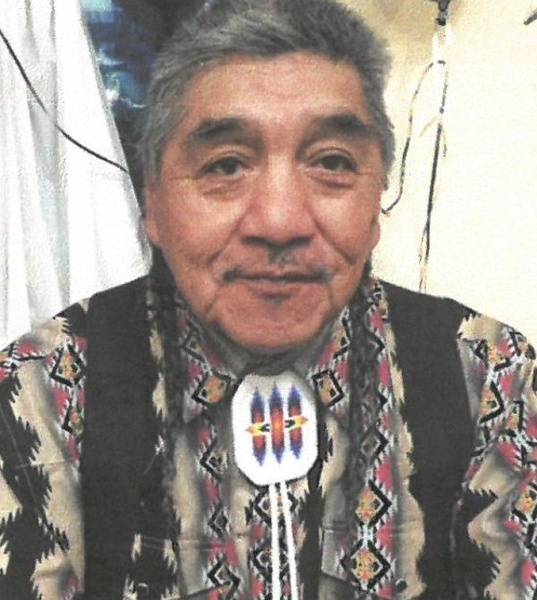 Our father, son, uncle, husband, nephew, and friend, Willard “John” J Johnson, Sr., age 79, of Neola, passed away June 26, 2021, after a short illness.
He was born March 9, 1942, in Ft. Duchesne, to Margret Accawanna and Wilson Johnson. He was raised by Ruby Accawanna. He married Peggy Johnson, they had 5 kids and later divorced. He married Carla Sampson, they had 2 kids, and later divorced. He married Marsha Ann Lybarger on June 22, 2021, after 20 years of companionship.
Willard was a traveling missionary for the 1910 Indian Shaker Church. He served in the US Army in Korea. He worked as a logger and choke setter in Shelton, Washington, and when he worked in Alaska. He was known by the nickname, “Smokey.” He built the ranch of his dreams and has done numerous blessings for his community. He was an emotional and spiritual support to many and won the hearts of many people wherever he went. He had many life-long friends.
He had a great fondness for horses, particularly Appaloosas, and had many prize winning horses. He also enjoyed rodeos, roping, training, grooming, trading, and anything that had to do with the horse business. His other hobbies included drawing, building, and helping people. He was a hardworker who seemed to never stop working. His grandkids used to say, “my grandpa can fix anyting.” People around him felt safe knowing he was close. He was the toughest native we knew.
Willard is survived by his wife, Marsha; children LaDean Johnson, Harriet Vasquez Luna, Willard J Johnson, Jr., Jamie Johnson, Willinda “Wendy” Johnson, Alton Johnson, Nathan “Dean” Harp; 20 grandchildren, 11 great-grandchildren, and his brothers and sisters, Roberta Johnson, Jonas Grant Bullethead Sr., Don Taveapont, Zelda Murray, Ron Cuch, Ruby Clifford, Eldra Masawiestewa, Louanne Reed, Marilyn Cuch; and numerous nieces, nephews, aunts, uncles, and other relatives.
He was preceded in death by his parents; grandsons, Jimi Lee Johnson, and Wakinyan Hokshila; granddaughter, Sheila Pickernell; brothers, Woodrow Accawanna, Carlin Cuch, Herbert Stanford, Pat Cordova; grandparents, Jim & Ruby Accawanna, and an aunt, Melba Appawora.
Graveside services will be held on Thursday, July 1, 2021, at 2:00 p.m. at the Ft. Duchesne Cemetery. There will be wake on Wednesday after 2:00 p.m. at his home in Neola. Military Honors will be presented.

To order memorial trees or send flowers to the family in memory of Willard J Johnson, Sr., please visit our flower store.