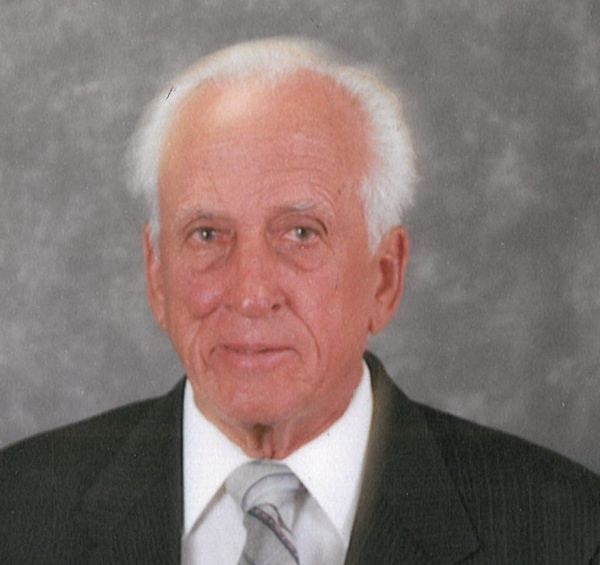 Verl Haslem, age 87 of Neola, Utah returned to the loving arms of his Heavenly Father on Monday, January 27, 2020.
He was born on April 8,1932, to John Henry and Rebecca Alice Hartle Haslem. Verl married Leah Duncan on August 28,1953, and they were later blessed with four children.
Verl was raised in Bennett, and as a young boy worked side by side with his father who taught him at a young age the love of hard work and ranching, which was carried on throughout the remainder of his life. He always said, “it is nothing but a privilege to be able to work.” After high school, Verl worked in the gilsonite mines prior to attending college. He graduated from the BYU College of Finance, also completing advanced studies at the University of Washington. During college he was drafted by the army and spent two years in Korea. He was employed by First Security Bank, where he spent 25 years, and then an additional five years at First Interstate Bank.
He always had such an enthusiasm and love for life. Verl’s hobbies included ranching, eating, fishing the back lakes, hunting, gardening, and telling only very factual stories. Well they may have been just a little embellished. He enjoyed carpentry, and with a little baling twine, he could fix anything. He built many homes, cabinets, and beds. One of Verl’s favorite pastimes was raising a multi-acre garden. At harvest time he loved to share his vegetables with family, close neighbors, and friends. Verl was a faithful member of the Church of Jesus Christ of Latter-Day Saints, serving in many callings. He was well known in the cattle business, and was very proud of his black Angus herd. Verl said “I suppose I will still be raising Angus cattle until I die because I like it. It is a peaceful way of life.” He received many agricultural awards for being an extraordinary rancher, one of them being Cattleman of the Year. Nothing brought more peace and enjoyment than taking care of his cattle on his ranches in both Neola and Wyoming. Many great memories were made at their summer ranch in Robertson, Wyoming.
He was always very generous, he could never look past someone in need and enjoyed serving others. He found great joy in spending time with his family. Verl said, “good food, family, jokes, and laughter is the best medicine for one's soul.” Verl believed he lived in the greatest period of time in all the history of the earth, “we have had the best of it all- horse and buggy to the jet and computer with comparable advances in the healing arts.”
Verl is survived by his wife, Leah Haslem, Neola; of 66 years, son, Alan (LeeAnn) Haslem, Neola; daughter, Tammy (Jason) Kelly, Neola; daughter, Laura Haslem, California; daughter in-law, Betty Haslem, Draper; 14 grandchildren, and 10 great grandchildren.
He was preceded in death by his parents, siblings, and son, Dan Haslem.
Funeral services will be held Saturday February 1,2020 at 11:00 a.m. at the Neola Chapel. There will be a viewing that morning from 9:30 - 10:45 a.m.  Burial will be at the Neola Cemetery with military honors presented by Roosevelt American Legion and the Utah National Guard.
The family wishes to express their sincere thanks to the loving staff of Uintah Basin Home Health and Hospice, and Dr. John Wells.
Condolences may be shared at www.hullingermortuary.com

To order memorial trees or send flowers to the family in memory of Verl Haslem, please visit our flower store.