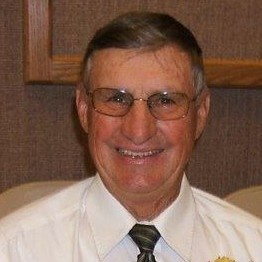 Verdus F Miles, loving husband, father, grandfather, and friend returned home to our Heavenly Father on April 19, 2020. He passed away peacefully surrounded by his family after a valiant fight with cancer.
He was born on December 20, 1937 to Fay and Alice Miles in Roosevelt, UT. He grew up in Mountain Home, and lived most of his life there. He graduated from Altamont High School where he was Student Body President, then attended Utah State University College of Agriculture and Applied Sciences in Logan. He married his high school sweetheart, Colleen Roberts, in the Salt Lake City Temple on April 26, 1957. They enjoyed 63 wonderful years of marriage together.
Verdus loved life. His greatest enjoyment was his family. Verdus was the center of all our family get-togethers. He joined in every activity and found happiness in spending time together. He was known for his mischievous grin and light-hearted laugh. He loved holding babies and taking his grandchildren out to see the animals on the farm.  He supported all of his children and grandchildren in their various sports and school activities over the years.
Verdus worked as a cattle rancher most of his life. He also was employed as a truck driver, a dairy farmer, and did beautiful rock and brick masonry work. He was faithful in fulfilling his many church callings. He was known for his endless hours of kindness and service to others. He especially loved serving in the Vernal Temple. He was a good example not only to family but to everyone he met. He had a strong testimony of the gospel of Jesus Christ and love for our Savior.
He is survived by his wife, Colleen, his children, Robin (Kim) Bastian, Rick (Stephanie) Miles, Clay (Jennifer) Miles, and Brett (Natalie) Miles, 17 grandchildren, 30 great grandchildren, and 6 great-great grandchildren.  He is also survived by his siblings, Ron (Shirley) Miles, Clair (Carolee) Miles, Dixie (Eldon) Watkins, Paula Esplin, and Kenn Miles.
He was preceded in death by his parents, his sister-in-law, Carolyn Miles, and his brothers-in-law, Reed Esplin, Terry Orme, and Keith Roberts.
As a family, we would like to send our love and appreciation for your prayers and kind words in our behalf. We would also like to thank the many health care providers, home health, and hospice for their tireless hours and gentle care of Verdus. In lieu of flowers, we would ask that you perform a heart-felt act of kindness in Verdus’s name.

To order memorial trees or send flowers to the family in memory of Verdus Miles, please visit our flower store.