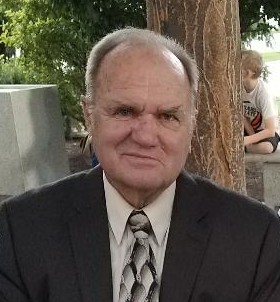 Verdell C. “Corky” Marx, Jr., age 71, of Roosevelt, passed away April 5, 2018, in St. George surrounded by his family.
He was born February 24, 1947, in Sacramento, California, to Verdell C. and Dorothy Walls Marx.  He married Kenna Jean Neilson on July 20, 1968, in Roosevelt. They were sealed in the Mount Timpanogos LDS Temple on May 31, 1997.
Corky served for six years in the Army National Guard. He had many careers throughout his life including owner and operator of the Polar King in Roosevelt; as a lumberjack, a construction worker with Chapman Construction, part owner of a furniture store, owner of a convenience store, a rock mason, and for the last 21 years, he worked at Newfield Production Company, where he made many lifelong friends.  He had a passion for vintage cars, owning many throughout the years.  Among his favorites, was his current ‘67 Camaro.  His pastimes included hunting, camping, and fishing. He enjoyed boating at Lake Powell with friends and family, vacations in Hawaii, and going for drives in his cars and on his motorcycles.  He was part of the “Wing Nuts”, a motorcycle group (gang!), made up of mostly Gold Wing motorcycle riders.  He had a great sense of humor, a quick wit, and always made people laugh– even at the end when he was so sick.  He had many friends, and was considered a dad to many of his kid’s friends. He always loved and never judged anyone.
As a member of The Church of Jesus Christ of Latter-day Saints, he served in the Elder’s Quorum presidency, among other callings, where he was able to make many lasting friendships.
He is survived by his wife of nearly 50 years, Kenna Jean; children, Douglas Troy (Juliann) Marx, Cody Wayne (Nancy) Marx, all of Roosevelt; Ryan Scott Marx, Layton; Travis Paul (Laurie) Marx, St. George; 16 grandchildren, 1 great-grandchild; mother, Dorothy Marx, Logan; brothers and sisters, David (Patsy) Marx, Hyde Park; Alan Marx, Draper; Margaret (Weston) Gunn, Marilyn (Greg) Krstyen, both of Kearns; and numerous nieces and nephews.
He was preceded in death by his father, Verdell; his parents-in-law, Clista Neilson Foote, Kenneth Neilson, and Paul Foote.
Corky was adventurous, full of life, and lived every day to the fullest.  He was very much loved and will be deeply missed!
Funeral services will be held on Saturday, April 14, 2018, at 11:00 a.m. at the Cove 2nd Ward LDS Chapel in Roosevelt (250 West 200 North).  There will be a viewing on Friday from 6-8 p.m. at the Hullinger Mortuary and on Saturday from 9:30-10:45 a.m. at the church.
Burial will be in the Roosevelt Memorial Park.  Condolences may be shared at www.hullingermortuary.com

To order memorial trees or send flowers to the family in memory of Verdell "Corky" Marx, please visit our flower store.