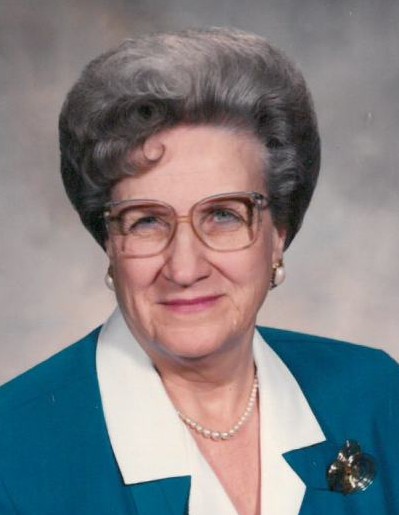 Velma Klingler Winn Carter, age 92, of Roosevelt, passed away January 23, 2018, at the Uintah Basin Medical Center.
She was born November 25, 1925, in Salt Lake City.  Her parents were Godfrey Christopher and Eulalia Ovard Klingler.  She was raised in Rexburg, Idaho until she met the love of her life.  She married Boyd Lyman Winn on January 14, 1943, in Rexburg, Idaho.  They were sealed on November 2, 1962, in the Manti LDS Temple.  He died October 30, 1986.  She married Shirl Henry Carter on April 28, 1995, in Provo.  He died August 8, 2013.
Velma was a wonderful homemaker and her kitchen was her haven.  She loved to cook and made sure everyone was well fed.  Her hobbies included fishing, doing cross stitch, embroidery, and making beautiful wedding cakes.  She fostered many children, and took in many nieces and nephews.  Her life revolved around her family, especially the grandkids.  Her face lit up whenever she saw them.
She was very active in the Church of Jesus Christ of Latter-day Saints and served in various callings, including Primary President on both the Ward and Stake level.  After her first husband, Boyd, died, she served an eighteen month indexing mission in England.
Velma is survived by her children, Charlotte (Dale) Winward, Roosevelt; Jeff B. (Kathy) Winn, American Fork; a special nephew who called her “mom”, Larry (Dahlis) Winn, Georgia; grandchildren, Sandee, Mark, Saul, Luke, Lori, & Matthew Winward, Tara (Dan) Larsen, Niki (Lynn) Monson, Lyman Winn, Spencer (Tara) Winn, Sterling (Brad) Lloyd, Larry & Christopher Winn; 16 great -grandchildren; and two brothers, Larry (Faye) Klingler, Sandy; and Blaine (Helen) Klingler, Rexburg, ID.
She was preceded in death by her husbands, Boyd & Shirl; and her siblings, Dorothy Spalding, Marion, Clayne, & Richard Klingler.
Funeral services will be held on Saturday, January 27, 2018  at 11:00 a.m. at the Ballard LDS Chapel.  There will be a viewing at the Hullinger Mortuary on Friday from 6-8 p.m. and on Saturday from 10-10:45 a.m. at the church.
Burial will be in the Cedarview Cemetery.  Condolences may be shared at www.hullingermortuary.com

To order memorial trees or send flowers to the family in memory of Velma Winn Carter, please visit our flower store.