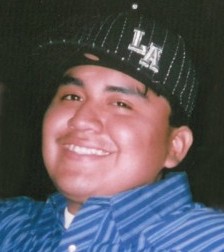 Trevor Shane John, age 30, of Randlett, was killed in an automobile accident on May 24, 2020, near Randlett.
He was born August 27, 1989, in Roosevelt, to Alban Gary John Sr. and Tammy Jenks John.
Trevor worked for 10 years as a crew boss for the Ute Tribe Water Settlement Fence Crew.  His favorite pastimes were watching UFC Wrestling, boxing, spending time in the mountains, hunting, bowling, listening to music, reading comic books, playing video games and doing puzzles.  He had a great fondness for Colorado and went there often.  He enjoyed watching stars, collecting rocks, playing basketball, hunting for antler sheds, branding cows with the family, and cooking on the Barbeque.  He was very traditional and took part in Bear Dances, Round Dances, singing with Red Spirit, and camping at the Sundance.  He was so proud of his Dodge Ram truck and was an avid dog and cat person.
He loved his family the most and he especially liked to go to watch his son wrestle and take his daughter, Honey, to pageants. He loved to go with them to pick up school lunches, cook breakfast for them in the morning, and bathe them at night.  He was compassionate and always willing to help.  He will be remembered for his smile.
Trevor is survived by his children, Honey, Alvis, Leela, Mazie; his mother, Tammy John; siblings, Elijah (Shawshen) John; Ian John; half-brothers and -sisters, Joey “Charlie” Murray, Robert Giles, Alban John, Jr.; Ashley Tuaalo, Natasha John, numerous nieces and nephews and a dog, “Hey, Hey,” and cats, “Crybaby” and “Kitty.”
He was preceded in death by his grandparents, Katherine & Richard Jenks, Sr., Ramona & Albert John.
Funeral services will be held on Thursday, May 28, 2020, at 10:00 a.m. at Tammy John’s home (3800 E 4250 S) near Randlett.  There will be a wake all day Wednesday.  Burial will be in the Randlett Cemetery.

To order memorial trees or send flowers to the family in memory of Trevor John, please visit our flower store.