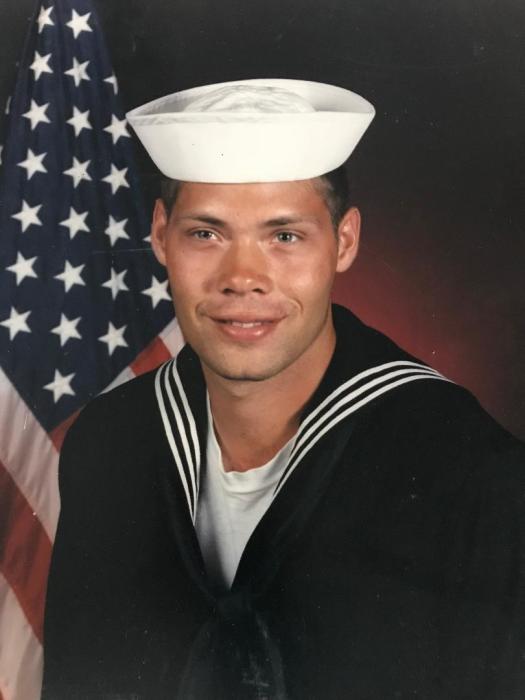 Terry Lynn Perkins, age 53, of Myton, passed away May 27, 2018, at his home surrounded by his family.
He was born November 29, 1964, in Tooele, to Allen A. and Lorrie Balfour Perkins.  He married Annette Michelle Reynolds on February 13, 1987, in Roosevelt.  They later divorced.
Terry was career military and retired from the US Navy after 20 years (and 15 days) in the service.  He served during Desert Storm and Iraqi Freedom and sailed on the battleship, USS Gary, and two carriers, the USS Constellation and the USS Nimitz.  He was able to visit many beautiful and intriguing places, his favorite being Singapore.  After his retirement, he came to the Uintah Basin and worked in the Oilfield.
He enjoyed camping, reading, watching NASCAR, and was an avid New England Patriots fan.  He loved his family and children.   He will be deeply missed.
Terry is survived by his children, Miranda Besst, Roosevelt; Kristine (John) McCarthy, Syracuse; Hayley Perkins (Austin Bruns), Myton; grandchildren, Brody & Brantley Besst, Kali & Carter Bruns, with two on the way; his mother, Lorrie Perkins, Myton; siblings, Joe (Mary) Perkins, Myton; Steve (Carol) Perkins, Vernal; Anna Mae (DeLoy) Tanner, Mesa, AZ; Ron (Wendy) Perkins, Rush Valley City; Martin (Soledad) Perkins, Virginia; and numerous nieces nephews, and other relatives.
He was preceded in death by his father, Allen, and his brother, Rick.
There will be a viewing from 6:00 p.m.-8:00 p.m. on Wednesday, May 30, 2018 at the Hullinger Mortuary. Military Honors will be presented at 6:00 p.m.
Following the viewing, there will be cremation.

To order memorial trees or send flowers to the family in memory of Terry Perkins, please visit our flower store.