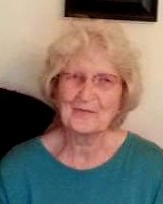 Terry Sage Cowan, age 87, of Duchesne, passed away on January 10, 2023.
Terry was born November 27, 1935 in Helper, Utah to Arthur Lee and Mary Tidwell Sage.  She married Jim R Cowan on July 10, 1955.  He died February 21, 2011.
Terry enjoyed being her own person, doing whatever made her happy.  She loved life, her flowers, and feeding the birds.  She enjoyed the outdoors, doing yard work, and always had a beautiful yard.  Her family was very important to her and she cherished each of them, she will be missed dearly.
She is survived by her children, Clarice Gilbert, Kelly (Cindy) Cowan, 3 grandchildren, 9 great grandchildren; a sister, Rosanna Wittu; and a brother, Jerry Sage.
She was preceded in death by her husband Jim, sister, Lynn Baker, grandson, Brian Cowan and son-in-law, Lynn Gilbert..
Per her wishes she was cremated and burial will be at a later date in the Duchesne City Cemetery.
We will hold you in our hearts, until we hold you in Heaven.

To order memorial trees or send flowers to the family in memory of Terry Cowan, please visit our flower store.