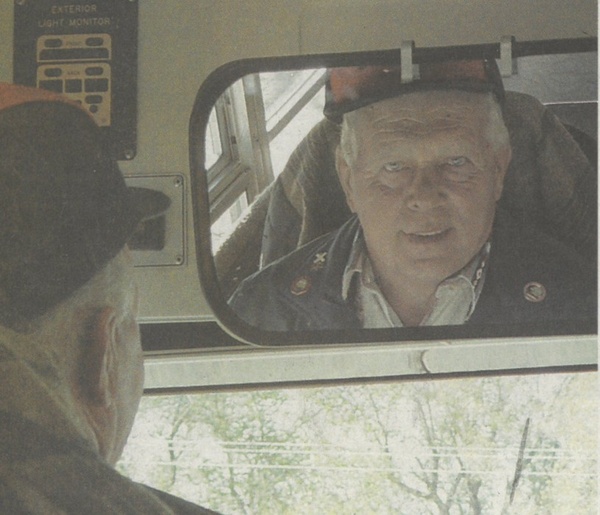 Stanley Heugly Keller, age 83, of Arcadia, died June 11, 2019 at home with his loving wife and family by his side.
Stanley was born November 14, 1935 in Murray, Utah to Edward Morgan and Audrey Heugly Keller.  He married Barbara Ann White on May 15, 1959, they were sealed in the Salt Lake Temple on May 15, 1964.
Stan was a hard worker who lived to farm and ranch.  He raised registered Suffolk sheep, Charolais and Angus bulls, milked cows, liked to go fishing in Rock Creek, hunting and visiting with people.
He was a a good mentor and friend to many, but especially to the kids who were on his school bus.  He cared about all the kids and was willing to help.  All the worlds problems were solved sitting on the motor at the front of the bus riding to and from school or on a trip.  He was a good listener and would politely give his advice.
He was always a great example of hard work, love, discipline, toughness but also tenderness.
He won the Bus Driver of the Year Award in 1993 from the Utah Safety Council and was twice given the award from the Duchesne County School District.
He retired after 39 years from the school district, working as the bus supervisor, mechanic and bus driver.  He loved teasing and giving nicknames to all the kids that rode his bus.
He was given the “Old Timer Award” in 2013 from the Duchesne County Cattleman Association.
He is survived by his loving wife of 60 years, Barbara Keller, children, Stanley Kent (Cheryl) Keller, Vernal; Carolyn (Frank) Roberts, Roosevelt, grandkids, Lee Keller, Jacquelyn R. Zager, Morgan Roberts, Haylee Roberts, great grandkids, Mckenzie, Parker and Riley Zager, Katelynn Keller and Logan Roberts and a brother, Vaughn Keller.
He was preceded in death by his parents, brother, Bruce Keller who was killed in Vietnam.
Funeral services will be held on Saturday, June 15, 2019 at 11:00 a.m. at the Bridgeland Ward Chapel.  Viewings will be held at the Hullinger Mortuary on Friday from 6:00 - 8:00 p.m. and Saturday at the church from 10:00 - 10:45 a.m.
Burial in the Roosevelt Memorial Park.

To order memorial trees or send flowers to the family in memory of Stanley Keller, please visit our flower store.