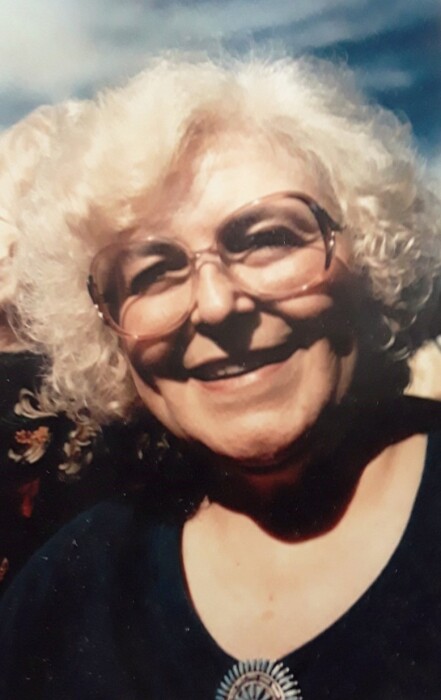 Sonja Neilsen Anderton passed away on August 8, 2020 in Vernal, Utah after a long battle with Parkinson's Disease.
She was born on June 22, 1940 in Bridgeland, Utah, to Clyde and Naturitch Neilsen. She was the 3rd of eight siblings, and spent her early years in rural farm country. The family didn't have a lot of money, but through the trials and tribulations, she and her siblings developed close-knit relationships that remained strong throughout their lives. They also had the benefit of living close to their grandparents, Donal and Ethel Kolb. Sonja dearly loved her Grandma Kolb, who was always a strong presence in her life.
Sonja was always a straight-A student, and excelled in school. She developed skills as an artist and seamstress. She also learned how to cook, which she would enjoy and perfect throughout her lifetime.
Her family later relocated to Roosevelt, Utah, where Sonja attended Union High School. She was very popular, and was the drummer for the Drill Team, as well as the Editor for the yearbook. Sonja developed into a very beautiful young woman, with her long dark hair and striking dimples. She had a very infectious smile, and was soon loved by all who met her. She was very kind and considerate, and could always make you feel at ease.
In her high school years, Sonja met and began dating Garth Levi Anderton, of Neola, Utah. The couple was married in Roosevelt on September 13, 1957. The newlyweds moved to Dugway Proving Grounds in western Utah, where Garth was employed as a Military Policeman. They initially lived on base, with Garth's parents, Eldon and Neva Anderton, and Sonja was able to get her high school diploma at the local high school.
Prior to the birth of their 1st son, Taggart John Anderton in 1958, the couple purchased and moved into a small mobile home at the Base trailer park. In 1960, Kit Kristen Anderton was born, followed by Jubal Garth Anderton in 1963.
The family enjoyed all the benefits of living on a military base, developing many friendships that lasted throughout their lifetimes. Sonja loved to visit with friends. Her best friends, Jane See and Arnelda Rasmussen, often shared “tea and sympathy” into the wee hours of the night whenever they could.
Along with raising their 3 sons, Sonja also honed her artistic talents. She learned and perfected the art of hand-painted ceramics at the Base craft shop, where she created numerous works of art, which are still held precious by her family. She also loved embroidery and quilting.
Sonja and Garth were excellent parents, and provided everything their family needed. When the kids' schedules would allow, Sonja began working at the Base PX, and later at the Post Commissary.

In 1969, they purchased a small farm in Terra, Utah, just 10 miles off base, in Skull Valley, where the family continued to flourish, raising every farm animal and plant you can imagine.
Sonja's love for cooking really took off at this point, with all the access to fresh produce and livestock raised on the farm. With her on-base friends from various places around the world, she learned and became adept at cooking dishes from many cultures.
Sonja was an excellent Mother, and saw to her boys' every need. She loved to teach them about their heritage and instilled a great sense of family in them. She had a way of knowing when something was wrong, and would always help them through it. She recognized and fostered her children's strengths, and was always there for them.
In 1975, Garth retired and the family moved back to the Uintah Basin, settling in Neola, where they built their dream home. After many years of limited visits, Sonja was so happy to be close to her family again. During this time, the family enjoyed many outings, reunions and vacations with family and extended family. They all loved the outdoors, and spent a lot of time camping and hunting. Sonja loved her siblings dearly, and enjoyed many good times with them.
Sonja worked for a time at First Security Bank in Roosevelt, and then spent many years working for the Ute Tribe, at Bottle Hollow and the Ute Tribe Cattle Enterprises, where she was loved and appreciated. Her youngest, son, Jubal, also appreciated her bookkeeping skills, as she worked for him for several years as he established his automotive repair business.
Garth and Sonja continued to raise a big garden in Neola, with Sonja cooking, canning or freezing the harvest every year.
Their home continued to be the natural gathering place, and Sonja was always the most gracious hostess. There was always plenty of food, and always room for one more. Sonja jumped at any opportunity to host a party, either to celebrate something, or for no reason at all.
She also loved to play games with her children, and with visiting family members. She loved to play Probe, Scrabble and Rummy Cube. She was even known, on occasion, to participate in a game of Sardines with her sons and nephews.
Sonja loved her grandchildren, and spent a lot of time with them, making each one feel as though they were the favorite.
In their later years, Sonja and Garth became snow birds, and purchased a 2nd  home in Overton, Nevada, where they loved to spend the winters. They enjoyed the warmer weather and had many visits from their friends and family.
Sonja was much beloved by everyone who knew her. She had a wonderful sense of humor, and loved to tell jokes, even though she often messed up the punch line, which was part of her charm. She was always so thoughtful and generous, always there to help anyone in need.

Due to health concerns, in 2007 Garth and Sonja purchased a one-level townhouse in Roosevelt where they would reside until they could no longer live alone. They were soon joined by their granddaughters Savannah and Jackie, who lived with them and took care of them until they moved into Parkside Manor, an assisted living facility. Jackie and Savannah grew up close to their grandparents, and shared a special closeness throughout their early years. They continued to visit their grandparents regularly, and always had a treat or some other surprise for them.
After 57 years of marriage, Sonja said good-bye to Garth, the love of her life, when he passed away on September 23, 2014. Due to the acceleration of her Parkinson's Disease she was moved to the Uintah Care Center in Vernal, where she remained until her passing. Sonja will rest next to her husband, Garth, in the Neola Cemetery.
Sonja is survived by her 3 sons, Taggart, Kit (Mary Lee) and Jubal (Cindy), 7 grandchildren: Lindsey Anderton, Landon (Jen) Anderton, Jacqueline (Matt) Butdorff, Savannah (Daniel) Byington, Alexis (Austin) Smith, Natalie Anderton and Sabrina Anderton, 4 great-grandchildren: Asher Anderton, Tucker and Georgia Byington and Jack Butdorff. Siblings, LaJean (Sandy) Richman, Janice Hall, Gwen Reynolds, Manfred (Pat) Neilsen, Lloyd (Lee) Neilsen and Becky Devener.
She was preceded in death by her parents, Clyde and Naturitch Neilsen, her husband, Garth Levi Anderton, and her brother Lonny Neilsen.
The family would like to send many thanks to their cousins, Jason and Tammy, and the staff at Parkside Manor, and the staff of the Uintah Care Center for their wonderful care and kindness to Sonja.
Kit Anderton would like to express his and his family's profound appreciation and gratitude to his brother, Jubal, sister-in-law, Cindy and Jackie and Savannah for all their many years of care and devotion to Garth and Sonja.
Graveside services were held at the Neola Cemetery at 10:00 a.m. on Friday, August 14, 2020 with burial following under the direction of the Hullinger Mortuary.

To order memorial trees or send flowers to the family in memory of Sonja Anderton, please visit our flower store.