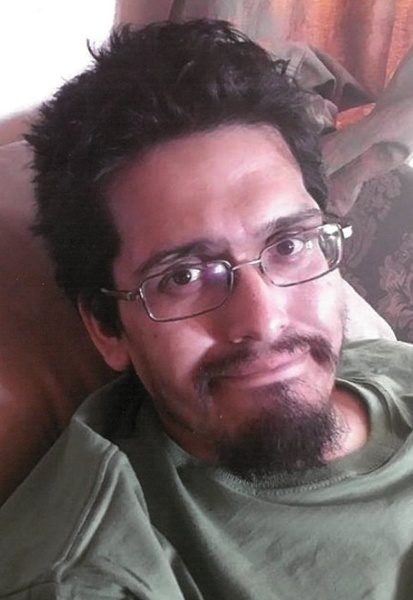 Samuel Sapanese Cuch, age 39, of Lapoint, passed away March 19, 2019, at his home surrounded by his family after a long battle with pancreatitis.
He was born July 10, 1979, in Olympia, Washington, to Edwin Cuch and Janet Lee Patterson Cuch.
Samuel went to Western Colorado Community College in Grand Junction where he received his associates in culinary arts.  He was a talented chef who worked in various restaurants.  Sam had a fondness for knives and learned to blacksmith so he could forge his own knives.  Sam enjoyed fishing and being surrounded by family.  He was a good artist and skilled in computers and technology.  Sam enjoyed writing stories and poem to answer questions of his life.  He also liked to attend and participate in the Bear Dances.
Sam was a great inspiration to every child that came around him, no matter what age.
He lived his adult life in Grand Junction, where he worked.  After contracting pancreatitis he moved back to Lapoint to live with family.  The family is grateful for the great lengths many doctors went to at the University of Utah Hospital to help him combat this disease.
Samuel is survived by his mother, Janet Cuch, Lapoint; father, Edwin Cuch; siblings, Peter (Lois) Boome, Washington; Mariah Cuch, Lapoint; Sarah Cuch, Vernal; Jenny Cuch, Eli Cuch, both of Lapoint; Vincent Cuch, Vernal; Colin Cuch, Sweden; Joon Cuch, Lapoint; aunts and uncles, Michael (Carol) Jack, Willard Washington, Anita Jose, Sherwood Cuch, Lynn Cuch, Newman Cuch, Reggie Cuch; Bill (Esther) Patterson, Becky (Steve) Grass, Laura (Gary) Jewitt, Beulah (Buck) Holman, LeRoy (Christie) Patterson, Maja Sanburg, Seattle, Washington; and numerous cousins, nieces and nephews.
He was preceded in death by his grandparents.
Graveside services will be held on Friday, March 22, 2019, at 11:00 a.m. at the John Harmes Cemetery in Whiterocks.  There will be a wake at his sister, Mariah Cuch's home (9000 North 8500 East, Lapoint) after 4:00 p.m. on Thursday.

To order memorial trees or send flowers to the family in memory of Samuel Cuch, please visit our flower store.