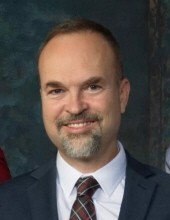 Russell Ralph Dart, 50 of Naperville, IL passed away on October 27, 2020 in an auto accident.
He was born in Vernal, Utah September 22, 1970 to Susan Sprouse Dart and Ralph Clyde Dart Jr. He is survived by his wife Yuliya Genrihova Galuscho and four sons Kyryll Kushnir, Ridge, Roman, and Roddick Dart.
Being around Russell was like the feeling after drinking a soda and the bubbles fizz up into a delicious tickle. His almost hyena like cackle was contagious. He kept that excitement laughter and throughout his life.
Growing up, Russell was rarely seen without a basketball in his hands. He enjoyed playing on the high school basketball team, listening to his favorite 80’s music, playing practical jokes, and driving his car off small jumps.
After high school, between 1988-1990, Russell served a two-year mission for the Church of Jesus Christ of Latter-day Saints in the Tokyo North mission. He graduated from Brigham Young University with a degree in psychology often working as a pesticide salesman during the summers. While at BYU, a friend persuaded him to train for the St. George marathon. He took 6th place and qualified for the Boston Marathon. His experience with pesticide sales led him to find a similar occupation. He then proceeded to follow a passion in financial advising and life insurance portfolios.
At the age of twenty-eight, he traveled to Ukraine and Russia and met his spouse Yuliya and son Kyryll. After working in Vernal, Utah for several years, he moved his family to Chicago. There, he, and his family decided to call Naperville home.
Russell loved the gospel of Jesus Christ. He volunteered to teach and help in his church community. At different times during his life, he served as a ward mission leader, stake mission leader, and high council member. His favorite calling was working with the missionaries because of his own passion for sharing the gospel. He was so proud of Kyryll for serving a two-year mission in Wisconsin and Ridge who is currently serving in Russia. He loved investigating the history of the Book of Mormon and the ancient artifacts of the Mound Builders and Hopewell people. Often his boys or Yuliya would accompany him on trips to look at artifacts of the ancient Americas. He even discovered an ancient mound close to home in the Herrick Lake area. He hoped it would one day be called Dart Mound.
Russell loved his wife and boys. He loved Yuliya so much he wrote a book about how they met and was recently working with an editor in Salt Lake to get it published.
After a hand surgery last year and some business setbacks, Russell battled mental illness. During a deep and painful journey, his sons Roman, Roddick, Ridge and Kyryll helped motivate Russell to go to counseling and attend an out-patient clinic. Russell continued to struggle but is now at peace embraced in the arms of those that have gone before him.
Graveside services will be held on Friday, November 6, 2020 at 11:00 a.m. at the Roosevelt Memorial Park.

To order memorial trees or send flowers to the family in memory of Russell Ralph Dart, please visit our flower store.