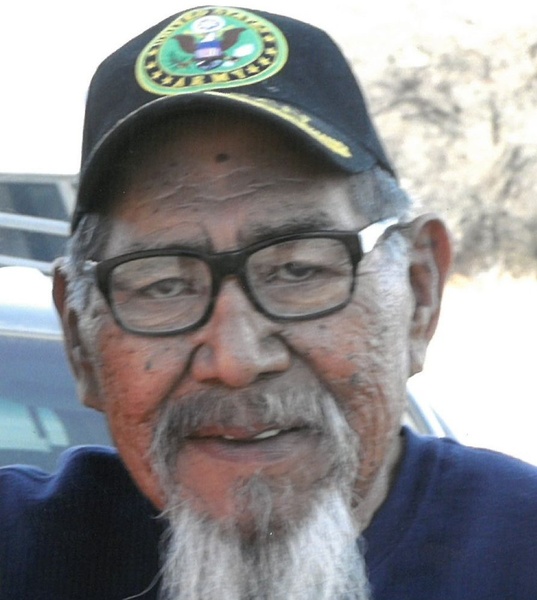 Roger Julian Redfoot, age 83, of Myton, passed away August 15, 2021 at his home.
Julian was born September 19, 1937 in Ft. Duchesne to Roger and Helen UncaSam Redfoot.
Julian joined the army and served for 2 years. He enjoyed traveling, visiting with everyone, hunting, fishing, camping, being in the outdoors, gambling, playing basketball, and softball. He cherished his native culture and participated in many Sundances and Pow Wows. He was a spiritual man who was willing to help others both physically and spiritually. He loved his family and delighted in spending time with them.
He is survived by his children, Lupe Hight, Delberta Redfoot Justina Redfoot,, Anita (Raul) Morales, Janet Redfoot, 17 grandchildren, 25 great grandchildren with one great-great grandchild on the way. His siblings, Noretah Martinez, Anna Redfoot Lee, LaDena (Darryl) Numan, Kathleen (Pat) Martinez, Linda Ankerpont, and “That Girl”, Connie Swedin .
He was preceded in death by his parents, siblings, Jack Redfoot, Thomas Redfoot, Norman Redfoot, Marvin Redfoot, LaGrand Redfoot, and Carma Redfoot.
Graveside services will be held on Thursday, August 19, 2021 at 9:00 a.m. at the Myton Cemetery. A wake will be held after 4:00 p.m. on Wednesday at the Ft. Duchesne Community Building.
Burial in the Myton Cemetery with military honors presented by the Myton American Legion, Utah National Guard and the Patriot Guard Riders.

To order memorial trees or send flowers to the family in memory of Julian Redfoot, please visit our flower store.