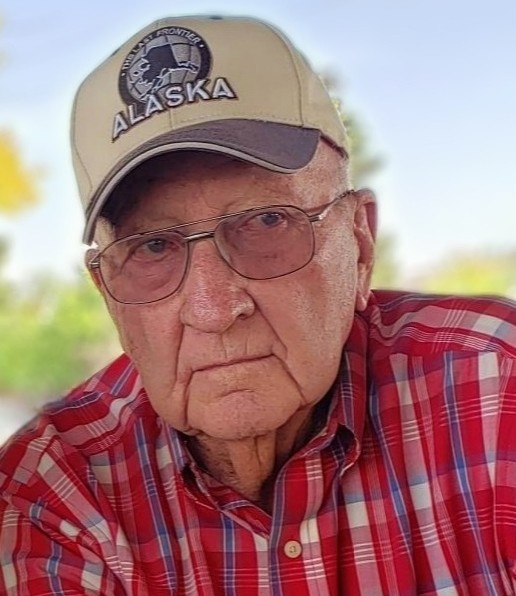 Robert Charles Alexander, age 86, of Vernal, formerly of Altamont, passed away on July 11, 2022 at the Ashley Regional Medical Center.
He was born to Charles Robert and Lillis (née Jessen) Alexander on July 4, 1936 in Roosevelt, Utah. He was raised on the family farm in Mt. Home. He married Billie Reidhead of Roosevelt on September 11, 1956.
In his early years, Robert loved sports. He played on the Altamont High School varsity basketball and baseball teams.  Billie always said, one of the first things that attracted her to Robert, was his ability for outstanding hook shots.  After marriage he took up work in road constructions, which he learned from his father-in-law. He and Billie followed road jobs all over the state of Utah, including roads to Flaming Gorge and Glenn Canyon dams. Their first home was a 35-foot Anderson trailer that they pulled from job to job.
When their son Gil started first grade, the family stopped following road jobs and settled down in Mt. Home before buying a home in Altonah, after which they purchased a café and gas station with adjacent home in Altamont. Robert continued to work distant road jobs but eventually took a job with Burdick Paving in Roosevelt, which allowed him to stop traveling for work. For many years he drove school bus for the Altamont schools.
Robert loved to hunt, fish, and camp, which he often did with the family. He was an avid fan of the Utah Jazz, New York Yankees, and Philadelphia Eagles, because of his daughter.
Robert is survived by his wife, Billie of Vernal; daughter, Brooke Bucher (Bill), Philadelphia, PA; sister, Jewel Lamb, Smithfield, UT; grandsons, MacAfee Alexander, Ft. Bridger, WY, Clayton Alexander, Kemmerer, WY, Jason Alexander, Kemmerer, McLean Mull, Philadelphia, PA,  Alexander Mull (Brandi), Inwood, WV, Davis Mull, Inwood, WV, and Billy Bucher (Melissa), Croydon, PA; great grandchildren, Ariana Gunnoe-Brown, Danica Campbell,     Beckham Mull, Griffin Mull, and Lillian Bucher.
Robert is preceded in death by his children, Susan Hope (1962), Robert Gil (2015), parents, Chuck and Lillis Alexander, a sister, Iris Lou (Dolly) Lindsay, and parents-in-law, Joe and Jewell Reidhead.
Funeral services will be held on Tuesday, July 19, 2022 at 11:00 a.m. at the Hullinger Mortuary.  A viewing will be held 1 hour prior to the service.
Burial in the Mountain Home/Boneta Cemetery

To order memorial trees or send flowers to the family in memory of Robert Charles Alexander, please visit our flower store.