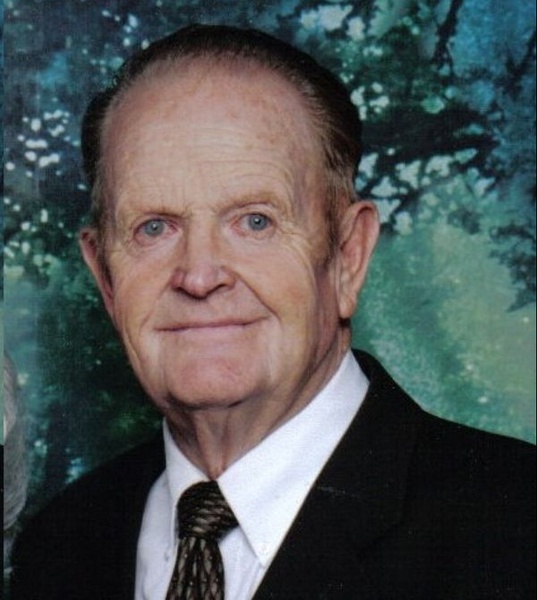 RG Ross, age 90, of Arcadia, returned peacefully to his heavenly home on September 1, 2021 due to COVID 19 when he was joyfully reunited with his sweetheart Bonnie Lee Frandsen Ross.
RG was born in Salt Lake City on June 27, 1931 to Margaret Ann Higgins and Thomas Stanley Ross. He was the youngest of 5 children.
RG lived in Arcadia most of his life. From a very young age RG learned to work as he hauled water and gathered wood for his family’s use. As a boy, he also spent many hours on horseback herding cattle up and down the roadways as they grazed. He grew up during the great depression and talked of how money was scarce but they always had what they needed to live. RG was a devoted member of The Church of Jesus Christ of Latter-day Saints. He had many callings and served as a temple worker. RG served a mission in the New England Mission in 1951. In 1953 he joined the Army and after basic training he was stationed in Germany. Travel was very important to RG and he was proud of his travels and had been to all 50 states and 19 foreign countries.
He worked many years on his family farm, which he continued throughout his life. When he got out of the army in 1955, he worked on the family farm and also had a job painting houses. Then after finishing college at the U of U he came home and taught 6th grade at Myton Elementary. He also worked for the Forest Service and Neighborhood Youth Corps. He also worked for the department of welfare as a case-worker, most of the time working with the elderly and handicapped. He retired in 1992 and went back to farming full time.
In December 1956 he was set up on a blind date where he met the love of his life Bonnie Lee Frandsen. On May 17, 1957, he was sealed to his eternal companion in the Manti Utah temple. She died November 5, 2015. They had 3 children Lori, Judy and Rick. They were blessed with 14 Grandchildren and 26 Great grandchildren.
RG was a quiet man with a good sense of humor. He had a determined soul and had a set way of doing things. He worked hard and believed in being organized. He enjoyed watching things such as Glen Beck. RG enjoyed spending time in the mountains, camping, fishing, river rafting, and panning for gold. He had a great love for classical music. He drove everyone nuts with it, including his mother from a young age. He enjoyed learning about the world and home remedies. He was always finding a new thing to help his family stay healthy. He enjoyed puzzles and reading in his later years. He loved his grandkids and his great grandkids, who brought him so much joy. He loved giving his great grandchildren rides on his scooter and would sing to them and cuddle the little ones as long as his arms would allow. He will be remembered best by his family for the love and care he gave to them and for being willing to help them in any way he could.
RG is survived by daughters, Lori (Roy) Casper, Talmage; Judy (Wally) Dunsmore, Arcadia; son, Rick (Dee Anna) Ross, Lee's Summit, Missouri; 14 grandchildren, 26 great-grandchildren.
He was proceeded in death by his wife, Bonnie Lee Fransen, his parents Margaret and Thomas, his siblings, Sylvea, Max, Fred, and Duane, a granddaughter-in-law Mesha Casper and a great grandson Shawn Clyde Dunsmore.
Funeral services will be held on Saturday, September 11, 2021 at 11:00 a.m. at the Altamont Chapel. A viewing will be held that morning from 9:30 - 10:45 a.m.
Burial in the Duchesne City Cemetery with military honors presented by the Duchesne American Legion, Utah National Guard and the Patriot Guard Riders.

To order memorial trees or send flowers to the family in memory of RG Ross, please visit our flower store.