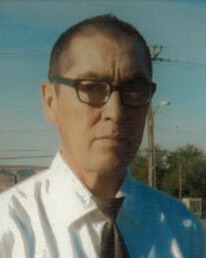 Rex Herrera, age 58, of Duchesne, passed away November 20, 2022, in Price, Utah.
He was born March 4, 1964, in Roosevelt, to Ross and Olivia Gallegos Herrera.  He had a companion for many years, Debbie Gallager, and she later died.
Rex worked as a construction worker and in the oilfield.  He enjoyed fishing, camping, rock and roll, joking around with everyone, and was happy-go-lucky.  He was an avid fan of the Arizona Cardinals, and had a caring and giving personality– he took care of his parents for many years and would give you his last dollar.  Always very polite, one of his catchphrases was, “I Thank You.”
The family would like to thank Kim Mortensen his nurse for the excellent care and compassion that she shared with him and his family.
Rex is survived by his son, Kevin Markle, of Orem; a step-son, Timothy Gallager, Indiana; grandchildren, Jude, Roma, Holden, Lucy, & Hazel; three step-grandchildren; parents, Ross & Olivia Herrera, Duchesne; sisters, Virginia (Robert) Bailey, Duchesne; Ida, of Price; and numerous nieces and nephews.
He was preceded in death by his siblings, Rowlley, Rose, Sadie, Rusty, Lee Harris, best friend, Bruce, and grandparents, uncles, aunts and cousins.
Per his wishes, he was cremated.

To order memorial trees or send flowers to the family in memory of Rex Herrera, please visit our flower store.