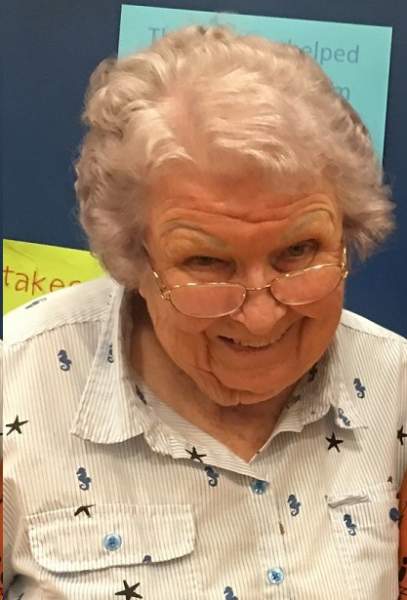 Reva Louise Richards Fitzgerald, age 88,  passed away on Monday, July 22, 2019 in Roosevelt.
She was born April 22, 1931 in Oakley Utah to Minnie Fransen and Albert Franklin Richards.
Reva graduated from South Summit High School in Kamas.  She attended LDS Business College in Salt Lake City.
She married Hal D. Fitzgerald on June 9, 1950 in the Salt Lake Temple.  They are the parents of S. Donell Fitzgerald (Joni), Nancy (W.E.) Hoggard, and Machelle (James H. Murray) Fitzgerald.  He died August 10, 2015.
Reva was an active member of the Church of Jesus Christ of Latter Day Saints and served in many stake and ward callings.  She was a member of the Daughters of the Utah Pioneers and served as captain of the Kamas Valley Camp.  Reva worked for many years at Kamas State Bank, Citizens Bank and Key Bank in Kamas. She was a devoted and loving wife, mother and grandmother, treasuring times with her family.
She is survived by her three children and grandchildren, Lindsie, Brittany, Dustin, Braden and Jeremy, and great-grandchildren, Kailee, Kelsie and Jackson.
Reva was preceded in death by her husband, son-in-law W.E. Hoggard, her parents, and her siblings, Elaine Padfield, Anna Mae Blazzard, Blaine Richard, and Nina Jorgensen.
A special thanks goes to grandson, Dustin for years of loving care.
A viewing will be held on Friday evening from 6:00 - 8:00 p.m. at the Hullinger  Mortuary.
On Saturday, July 27, 2019, a viewing will be held at 11:00 a.m. in the Kamas Church of Jesus Christ of Latter-Day Saints Ward Chapel, 100 West Center Street, Kamas, UT.
Graveside service will follow at noon in the Marion Cemetery under direction of Crandall Funeral Home.

To order memorial trees or send flowers to the family in memory of Reva Fitzgerald, please visit our flower store.