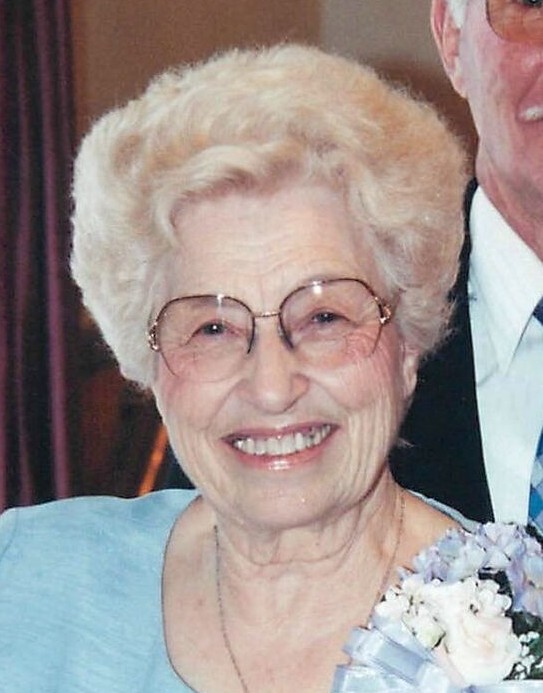 Our loving mother, grandmother, sister, aunt, and friend, Renae Gilbert Miller, passed away on August 13, 2018.  Renae was born on January 4, 1931 to John Alma and Geneva Frost Gilbert.  She was the second of eight children.  Her childhood was spent in Arcadia and Tooele before moving to Roosevelt in 8th grade.  Soon after arriving in Roosevelt, she spotted a boy leaning on his crutches at Sather’s corner.  She was instantly smitten.  They were married on November 24th, 1953 in Elko, Nevada. The marriage was later solemnized in the Salt Lake LDS temple.
They had a lasting marriage as they supported each other in their endeavors and throughout all of the ups and downs of life.  Together, they ran several businesses including T.R. Merc and Mode O’ Day in Roosevelt, in addition to farming and ranching in Montwell and Neola.  These endeavors provided many opportunities for work and service, as well as, a place to teach their children valuable lessons. They had a relationship full of love, laughter, friends, family and just the right amount of teasing.
Together they had eight children and even though they had a full house, Renae always provided a home for “extras” who just needed a place to stay. They found joy supporting their children and grandchildren in their various endeavors.
Renae had a great love for life and for her family, both immediate and extended. She was a terrific example of compassion, unselfishness, sacrifice, and learning from our trials and tribulations. Renae taught by example how to quietly serve, befriend, and love others.
Renae’s motto was that a diet of chocolate and Dr. Pepper are good for the soul and most importantly that “happy people are healthy people”.
Renae was an active member of the Church of Jesus Christ of Latter Day Saints. She had a strong testimony of Jesus Christ and of the gospel.  She fulfilled many callings in both stake and ward capacities, including Relief Society President and Stake Young Women’s President. She had a great love for the youth.  She and Lyn also served an 18 month mission in Wellington, New Zealand.  They both called their mission the “best vacation they ever had”.  Renae’s most recent church calling was that of nursery leader.  She was a natural with children and babies.
Renae was preceded in death by her husband, Willis Lyn Miller; two sons, Mark Randall Miller and Tyson Gilbert Miller; her parents, John and Geneva Gilbert; two brothers, Byron John Gilbert, Jack Frost Gilbert; and sister, Shauna Rebecca Gilbert.
She is survived by (Jeri) Miller, daughter-in-law, Salt Lake City, UT;  Kelly (Sheila) Miller, Raleigh, NC; Shawn (Nora) Miller, Provo, UT;  Michelle (Dennis) Stevens, Vernal, UT;  Steve (Lorna) Miller, Provo, UT; Chantel (Silas) Bennett, Hobbs, NM; Angel (Chris) Monk, Farmington, NM; 26 grandchildren and 14 great grandchildren. Her sisters; Maurine Bellon, Sherrie Burdick, Jean Carlson and Tenna Herman.
Funeral services will be held at 10:00 a.m. on Saturday, August 18, 2018 at the Edgemont 2nd Ward LDS Chapel, 555 East 3230 North in Provo, Utah.
A viewing will be held from 8:30-9:45 a.m. prior to the services.
Burial will be in the Roosevelt Memorial Park at 2:00 p.m.

To order memorial trees or send flowers to the family in memory of Renae Miller, please visit our flower store.