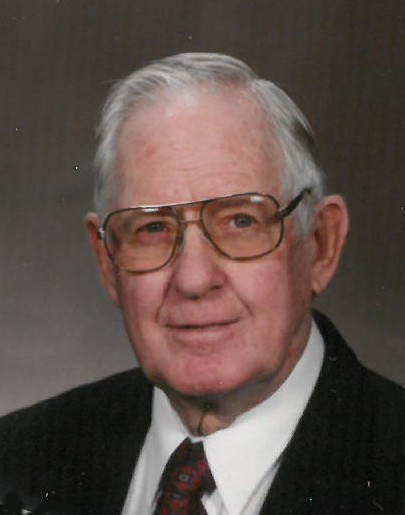 Ray Haslem, age 92, of Roosevelt, formerly of Tridell, passed away June 27, 2018, at his home.
He was born July 23, 1925, in Bennett, Utah, to Clair and Doris Ann Diamond Haslem. He married Isola Beth Morrill on January 19, 1951, in the Salt Lake LDS Temple.
Ray worked as a general contractor and cabinet maker all of his life, building many homes throughout the Basin. He was an excellent woodworker and even after his retirement enjoyed making furniture, dollhouses, jewelry boxes and even his own casket. He worked a number of years for Snyder Irrigation where he designed and installed many of the wheel lines and pivot lines used in the area. For a time, he also owned and operated a saw mill with his son. Ray had a pilot’s license and was a member of the old Roosevelt Flying Club. He loved to fly. His other hobbies were fishing and hunting.
He was an active member of the Church of Jesus Christ of Latter-day Saints, serving in various bishoprics, as a high councilor, and as a temple worker in the Vernal Temple.
Ray was a veteran of the Merchant Marines; something he was very proud of.
Ray is survived by his wife, Isola, of Roosevelt; children, Beth (James) Goodrich, North Salt Lake; Jean (Ron) Ruiz, Napa, CA; Julie Haslem, Bountiful; Wade (Christine) Haslem, Clair (Dana) Haslem, both of Vernal; Don (Deborah) Haslem, Doris (Phillip) Bertoch, Arlene (Brian) Southam, all of Roosevelt; Sharla (David) Wilcox, Twin Falls; 46 grandchildren (of those 3 boys and 4 girls are currently serving LDS Missions), 46 great-grandchildren with one on the way, one great-great-grandchild; daughters-in-law, Kathy Haslem, Bridgeland; JoAnn Haslem, Ohio; brothers, Wayne (Valorie) Haslem, Hanna; William (Boneta) Haslem, St. George; and numerous nieces, nephews, and other relatives.
He was preceded in death by his two sons, Keith & Doyle Haslem; and a sister, Joyce Bolton.
Funeral services will be held on Saturday, July 7, 2018, at 12 Noon, at the Tridell LDS Chapel. There will be a viewing on Friday from 6-8 p.m. at the Hullinger Mortuary and from 10:30-11:30 a.m. at the church.
Burial will be in the Tridell Cemetery.

To order memorial trees or send flowers to the family in memory of Ray Haslem, please visit our flower store.