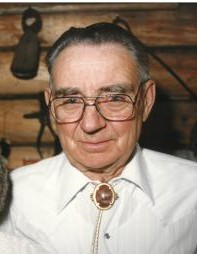 Ralph Ernest Prescott , age 97, of Neola, passed away peacefully May 4, 2020, at his home in Hayden, Utah.
He was born September 6, 1922, in Hayden to Ernest J. and Elizabeth Maud Page Prescott. On December 15, 1947, he married Verrena Simmons, “his Sweet Pea” in Hayden. The two of them lived on their ranch in Hayden all their lives. She passed away on July 12, 2016.
In his younger days, Ralph and his father loved to compete in the horse pulls at the Uintah Basin Industrial Convention (UBIC), then held in Ft. Duchesne. Their well trained pulling horses won many competitions. He also was a wrangler on Merriman’s ranch in Whiterocks. For a brief time he worked in the Park City Silver mines.
During World War II he served in the United States Navy. He was stationed in Brisbane, Australia and the Philippines. Upon returning home, Ralph worked on a family ranch in Idaho. Ralph then returned to Hayden to build his own ranch. For over 20 years he worked as a line cook at Steven and Ned’s Café in Roosevelt, Utah. He also worked as the produce manager at Safeway’s until he retired to his ranch to do the work he loved.  His favorite pastimes were fly fishing, raising corn and watermelons, and sitting in his favorite chair in the shop drinking Mt Dew and eating ice cream.
Ralph is survived by his children, Doug Prescott, Neola; Dick (Carole) Prescott, Pleasant Grove; Don (Rose Marie) Prescott, Shelley, ID; Lynn (Gwen) Prescott, Elvis (Debbie) Prescott, all of Neola; Cindy (David) Richens, Vernal; 14 grandchildren, 28 great grandchildren, and numerous nieces and nephews.
He was preceded in death by his wife, Verrena; a grandson, Rowdy Prescott, daughter-in-law, Fonnie Prescott; siblings, Zelda Elmer, Jay Prescott, Vance Prescott, Beth Moosman, Muril Moosman, Fannie Williams, and Audrey Pectol.
There will be family viewing at Hullinger Mortuary on Saturday, May 9, from 9:00 to 9:45 a.m.. A graveside service for immediate family (due to COVID-19 restrictions) will be held at 10:00 a.m. at the Roosevelt Memorial Park with military honors provided by the Roosevelt American Legion.

To order memorial trees or send flowers to the family in memory of Ralph Ernest Prescott, please visit our flower store.