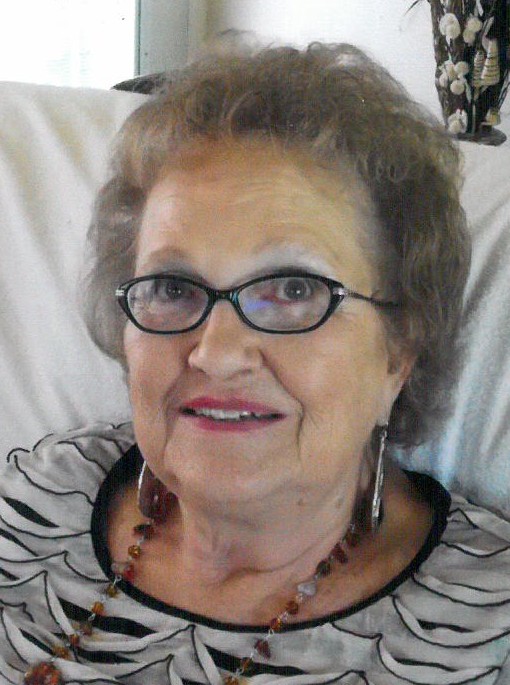 Peggy Kristine Wills Lindsay, age 73, of entered Heavens Gate April 8, 2018.
She was born February 11, 1945 to Alma Leonard and Carrie Pedersen Wills.
Peggy was a beautiful little girl with sparkling eyes, blonde hair and a smile that could melt you heart. She had those same traits throughout her life. She is the youngest of six children, four sisters and one brother. Living on the family farm in Hancock Cove it didn’t take long to become a real tom boy. She could ride a horse, milk cows and drive tractor. Eventually the family moved to the Neola Highway. She was about eight when she was accidently run over by a large tractor while helping her father haul hay. She was not expected to live, but through the power of a Priesthood blessing and many prayers, she was healed. Peggy would grow up, attend school at Roosevelt Elementary, Roosevelt Jr. High and graduate from Union High School. She attended Beauty School for a while, but decided that was not her talent. She married Allen Collins. They moved to Las Vegas shortly after their daughter Kim was born, eventually ending up in California. But Utah was home so she moved back after a few years, and then they later divorced. Peggy married Douglas “Butch” Lindsay, and moved to Mountain Home, Utah. They became the parents of a blonde haired blue eyed baby girl they named Mischelle.
Peggy became a pretty good shot with a rifle, liked to hunt, loved fishing, rock and arrowhead hunting. When they divorced, she left Mt. Home and returned to Roosevelt where she worked at the old Grants Market a few months then went to work at the Roosevelt Hospital as the circulating nurse in surgery. A few years later she and her two daughters moved to Murray.  She worked for 12 years at Deseret Pharmaceuticals where she helped develop and make special IV setups. She left Deseret and became part owners of Schrader Stoves where she helped make and sell the wood burning stoves. When the business closed Peggy opened her own antique shop called “The High Button Shoe” in Murray. She traveled across the States looking for and purchasing antiques. She loved beautiful things, especially jewelry and antiques. She took classes in interior decorating which you could tell when you entered her home. She was always so talented, had an eye for color and was not afraid to pick up a hammer or saw. She could sew, paint, upholstery, refinish furniture and hang wallpaper.  She was a landscaper, a builder, could lay tile and work cement. When she saw something in a magazine she liked, you could soon find it in her home or yard all made by her. She was an awesome cook.
Peggy went to work for IHC where she worked for 10 years. She decided to transfer to St. George and eventually retire there. During this time she was diagnosed with breast cancer. She underwent Chemo and Radiation treatments and has been cancer free for over ten years. Sadly the treatments took its toll on her, Her daughter Mischelle moved in to care for her. As her health deteriorated, she made the decision to sell her condo in St. George and return to Murray, where she lived for five years with her daughter Mischelle before returning to Roosevelt where she has been a resident of the Uintah Basin Rehabilitation Senior Villa for almost two years.
Peggy loved music and loved to dance. When entertainers came to the Villa or the Activity gals turned on the stereo she would dance around the room and dance with her nurses. They called her their dancing partner. She especially loved the rock and roll of the sixties. Most of all Peggy loved her family. She was a foster parent. Has always been a people person and had many friends. She loved to socialize and her home was always open to family, friends, her children's friends and neighbors.
Peggy is survived by her daughters, Kimberly Collins Hackford, Mischelle Lindsay (Eddie Mounteer) both of Murray; 7 grandchildren, 3 great-grandchildren; sisters, Patricia Todd, Bountiful; Joyce Eldredge, Ballard; brother, John (Edna) Wills Roosevelt; and numerous nieces and nephews.
She was preceded in death by her parents, her sisters, Marilyn Merrell, Ruth Erickson; brothers-in-law, Keith Todd and John Eldredge; nephews, Kevin Erickson, John and Derk Eldredge.
Her loving heart and beautiful smile will be sorely missed by her family and all who knew her.
Funeral services will be held on Saturday, April 14, 2018, at 11:00 a.m. at the Hullinger Mortuary with a viewing one hour prior to the services.
Cremation to follow services and then the cremated remains will be buried at the Roosevelt Memorial Park at a later date. Condolences may be shared at www.hullingermortuary.com

To order memorial trees or send flowers to the family in memory of Peggy Kristine Lindsay, please visit our flower store.