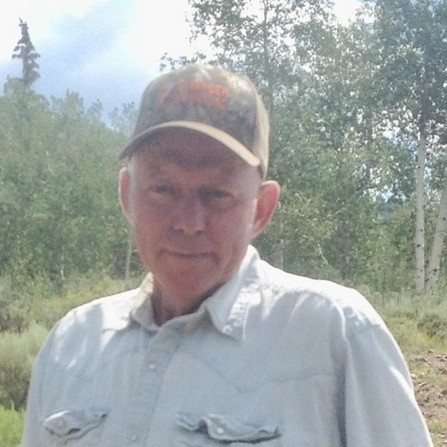 Our dear, sweet husband, father, grandfather, and brother, Paul L. Atwood, returned back to our loving Heavenly Father on Saturday, September 5, 2020 at his home surrounded by people that loved him dearly.
Paul L Atwood was born on November 5, 1947, in Roosevelt, Utah to LaVon R.
and Bernece Miles Atwood.  LaVon and Bernece had five daughters and so for them to bring home a baby boy was pretty exciting.  He was very spoiled and much loved by his five older sisters.  Seven years later the baby of the family, David, was born.
Paul grew up in Bluebell, Utah.  He spent his youth helping on the family farm.  He loved riding and breaking horses.  He milked many cows and baled many bales of hay on the farm.
He graduated from Altamont High School in 1966.  He moved to Salt Lake City and went to work for the State Road Department as a surveyor.  He made many life long friends there.
He decided to move back to Bluebell to help his parents on the farm.  He worked on a drilling rig, worked for Ned B. Mitchell and then for Shell Oil Co.
In 1976, he decided to start his own business, “Paul’s Custom Meats”.  He butchered and packaged many thousands of beef for many people throughout the Uintah Basin and even in to Colorado.  He made many lifetime friends through this business.  He gained much respect from his customers and was known for his honesty and integrity.  He was a very hard working guy.  He was still working for Shell Oil and was doing his meat cutting after work.  Most days were 15 hour work days for him.  He hired many neighborhood boys to help in the meat shop and many of these boys used that experience, later in their lives, to support their own families.  He loved those boys and was so grateful for the outstanding job they did for him.
In 2007 he went to work for Western Petroleum.  He retired in 2011.  He loved this job and the people he worked with there.  He was an avid Utah Jazz fan.
On June 1, 1973, he married the love of his life, Elaine Cook, in Ballard, Utah.  On October 14, 1986 they were sealed for time and all eternity in the Provo Utah Temple.  One of the last things Paul said to Elaine was how grateful he was that they had been sealed as a family and had their temple covenants.  This was very important to him.  They became parents of five precious children.
He was an active member of the Church of Jesus Christ of Latter Day Saints and served in many positions.
Paul served in the Vernal Utah Temple as a temple ordinance worker for ten years.  He loved working in the temple.  His spirit absolutely shined with this service.  He had a very strong testimony of Temple work.  Paul and Elaine traveled to most of the Utah and Idaho temples and enjoyed it so much.
He was a true gentleman and loved his wife and treated her with utmost respect.  He loved his children, grandchildren, great grandchildren and his brothers and sisters and their families.
A friend said this about Paul, “Paul was a man of little words and huge integrity.  When he spoke he had something worthwhile to say and everyone listened.  Paul spoke volumes by the example he set and the way he lived his life.”
He is survived by his wife of 47 years, Elaine, of Bluebell; children, Stephen (Rachelle) Cook, Julie (Bubba) Ross, both of Roosevelt; Skyler (Terra) Atwood, Bluebell; Susie (Shane) McMullin, Bennet; Shane (Lacy) Atwood, Roosevelt; Natalie Atwood, Salt Lake City; 29 grandchildren and nine great-grandchildren.  Siblings: Marva (Myrlin) Fenn, Bountiful; Carma (Gene) Berrett, Murray; Gloria (Leon) Mansfield, Vernal; Dave (Krista) Atwood, Vernal.  Brother and sister-in-law: Max Cook, Ballard; and Leah (Brent) Bastian also of Ballard.
He was preceded in death by his parents, LaVon and Bernece, sisters, Marolyn Clark and Eloyce Allred; brother, Clifton LaVon Atwood; parents-in-law, Fred G. And Lois Betts Cook; sister-in-law, Millie Irene Cook; brothers-in-law: Robert Clark and Max Allred; grandson, Paul L. Ross and son, Kenny Atwood.
Funeral services will be held at Paul’s home in Bluebell on Friday, September 11, 2020 at 11:00 a.m. with a viewing from 10:00 - 10:45 a.m.  An evening viewing will be held on Thursday at the Hullinger Mortuary from 6:00 - 8:00 p.m.
Burial in the Altamont Cemetery.
“No use in getting mad, you just have to get glad again” “You are my sunshine, my only sunshine”

To order memorial trees or send flowers to the family in memory of Paul L. Atwood, please visit our flower store.