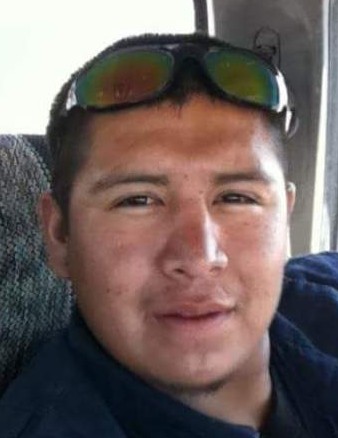 Patrick Wayne “Sonny” Taveapont, age 30, of Ft. Duchesne, passed away April 27, 2018, from injuries sustained in an automobile accident.
He was born August 9, 1987, in Roosevelt, to Sterling Ewell Taveapont and Hazel Rose Blackhair.
Patrick, “Sonny” and to his nephews and nieces, he was known as “Uncle Bunny.” He was a “Jack-of-all-trades,” working as a welder, a carpenter, and as a roughneck.  He was very energetic and never still, often getting everyone going to the mountains for a spur of the moment camping trip.  He enjoyed hunting, fishing, and was an excellent cook.  He was a member of the Native American Church, and was a Sundancer, understanding of the traditional way of Grandfather Earth.
Patrick’s compassion, friendly nature, along with his great sense of humor and vibrant smile would lift anyone’s spirits.  He had a way of connecting with people that encouraged them to be better.  He was a natural leader.  He was a protector of his loved ones, family, friends and anyone who he felt was in need.  He loved children and they loved him and could teach and mentor them in ways they understood.  His grandfather, whose name was “Blue Star,” named Patrick “Little Blue Star” after him because he shone brightly.  He was a very respectful person, especially to his elders, and loved all of his family.  He had a very kind, loving, and generous personality, and he was very giving and always made sure everyone around him was taken care of.  He would go out of his way to help anyone who needed it – without a second thought.  He was a great Man of Honor and truly selfless.  He is very much loved and will be deeply missed.
Patrick is survived by his companion, Naomi Navanick; his children, Antonio Marquez, Kaisen & Kaster Taveapont, a step-daughter who he raised as his own, Cianna Myore; his parents, Hazel Blackhair, Sterling Taveapont, Clarinda & Reggie Jenks, Sr.; Brad & Peggy Draper, step-father, Charles Cox; grandmother, Angela (Dale) Shavanaux; brothers and sisters, Alana Taveapont, Jessica (Orin) Shuck, Jennifer Taveapont (Nataly Aguilar), Sidney Atwine (Anesha Wopsock), Jeannette (Miguel) Cesspooch Mendez, Henry (Valencia) Cesspooch, Keenan (Trini) Taveapont, and numerous nieces, nephews, aunts, uncles, cousins.
He was preceded in death by his grandparents, Ruby Atwine & Johnnie Blackhair, Jr.; Frank Lee Taveapont; Lydia & Ben Watts, Sr.
Funeral services will be held on Tuesday, May 1, 2018, at 10:00 a.m. at the family residence in the Richardson Subdivision where he will be taken on Monday at 4:00 p.m. for a wake.
Burial will be in the Ft. Duchesne Cemetery.  Condolences may be shared at www.hullingermortuary.com

To order memorial trees or send flowers to the family in memory of Patrick Wayne Taveapont, please visit our flower store.