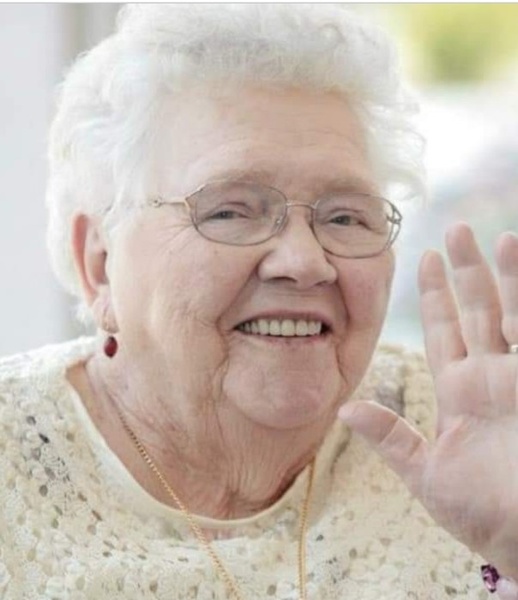 Norma Szymanski, of Ogden, Utah died Sunday, January 20, 2019  in the George E. Wahlen Veterans' Home at the age of 93.
Norma was born September 13, 1925 in Fairview, Franklin County, Idaho to Alonzo Hazelton Harding and Margaret Rue Larsen Harding.
She grew up in Fairview and graduated from Preston High School.  Norma loved music and enjoyed singing with her sisters most of all.  She sang in the high school Acapella Choir and began directing music at the age of 16.  She continued directing and singing in choirs until the age of 80.  Norma sang in many choirs, including Ward Choirs, the Elda Carlsen Ladies Chorus in Preston and in a Ladies Barbershop group in Lake Havasu City, Arizona.
Norma married Thaddeus Szymanski of Thief River Falls, Minnesota on November 20, 1945 in the Logan Temple of the Church of Jesus Christ of Latter Day Saints.  They made their home in Fairview, Idaho.  After 5 years of marriage they found themselves with no work, so they purchased a farm near Goodridge, Minnesota where they built a Grade A Dairy.  Here they raised 6 children. Norma was a 4-H club leader.  She worked for 5 years as secretary/bookkeeper for Goodridge School District.  After 20 years of farming in Minnesota, arthritis was plaguing Norma and Thad.  None of their children expressed an interest in farming, so they sold the farm and moved to Lake Havasu City, Arizona in 1970.  Norma worked as bookkeeper at Ray Lumber for 18 years.
After retiring, they moved to Bluebell, Utah in 1989 to be near family.  Thad passed away in 1996.  Their daughter, Mary Bird of Bluebell, passed away in 2004.   Norma moved to Ogden in 2005 to be closer to her other children.   She volunteered in schools as a Foster Grandparent.  She was an active member of the Church of Jesus Christ of Latter Day Saints, and served as a visiting teacher, visiting teaching coordinator, and secretary in Relief Society.  She also served in various other church callings in Primary and Young Women throughout her life.
Norma was preceded in death by her husband, Thaddeus; daughter, Mary (Kerry) Bird; 2 brothers: DeWayne (Clara) and Spencer (Donna) Harding; and 3 sisters: Anna (Doran) Barlow, Carol (Orville) Harmer, and Margaret (Glen) Meek; and 2 grandsons, James and John Moore.
She is survived by one brother, Thomas Blake (JoAnn) Harding of North Ogden;  4 sons: Lon (Mozelle), West Jordan, Ut, Ben (Phyllis), Clyde, Kansas, Richard (Cindy), Clinton, Ut, and Paul (Sharon), Rose Park, Ut; one daughter, Christine (John) Moore, Ogden, Ut; 41 grandchildren and 116 great-grandchildren, with 5 more expected. Norma loved her grandchildren and great grandchildren, and knew each of them by name.
The family would like to thank the employees and volunteers of the George E. Whalen Veteran's home, Bristol Hospice, and the Independence Branch of the Church of Jesus Christ of Latter-day Saints for their love and care.
Funeral services will be held on Saturday, February 2, 2019, at 11:00 a.m. at the Wasatch Ward Chapel, 6350 Combe Road, Ogden, where there will be a viewing that morning from 10-10:45 a.m.
Burial will be in the Bluebell Cemetery on Monday, February 4, 2019 at 11:30 a.m.

To order memorial trees or send flowers to the family in memory of Norma Szymanski, please visit our flower store.