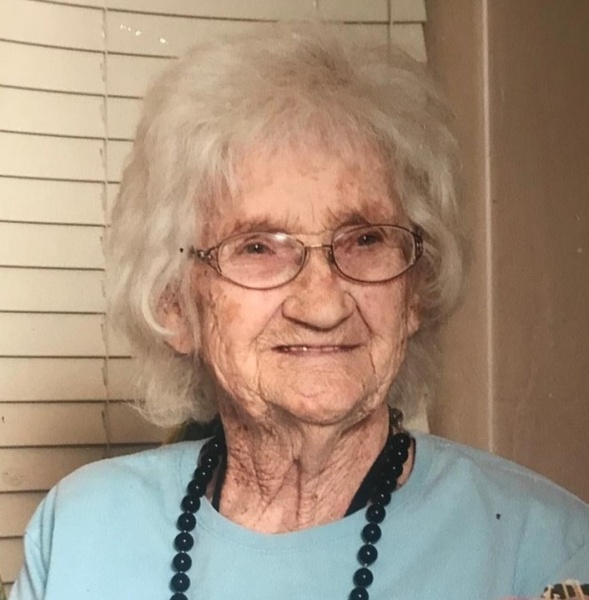 Nial LaPreal Richens, age 94, of Gusher, passed away May 16, 2019, at the Uintah Care Center.
She was born January 26, 1925, in Vernal, to William Albert and Martha Hicks McCurdy. She married Vern. B. “Bud” Richens on June 23, 1943, in Malad, Idaho.  They were later sealed in the Salt Lake Temple of the Church of Jesus Christ of Latter-day Saints.  He died August 8, 2012.
Nial helped with the war effort in her late teens by working on planes.  She was also an avid baseball and softball player on all female teams because all of the men serving in World War II.  She enjoyed camping and hummingbirds and would often spend weeks camping in the mountains and take her hummingbird feeders with her.  She also crocheted, hunted, and had a stubborn streak.  She and Bud served a mission in Oklahoma and they were very active in the church.
She loved her family and especially her grandchildren, great-grandchildren.
Nial is survived by her son, Cyle (Shelly) Richens, Vernal; 11 grandchildren, 33 great-grandchildren, 12 great-great-grandchildren, and numerous nieces and nephews.
She was preceded in death by her husband, Bud; daughter Raema Carter; son, Vernon; granddaughter, Sherry Melo; grandsons, Brian & Tracy Richens, and all of her siblings, Delilla McCurdy, Stella Wooley, Harold, Clyde, Mont, William “Bill,” Cyle, Martha, Deloy “Butch,” & Gwenda McCurdy.

Funeral services will be held on Monday, May 20, 2019, at 11:00 a.m. at the Ballard Chapel of the Church of Jesus Christ of Latter-day Saints.  There will be a viewing on Sunday from 5-7 p.m. at the Hullinger Mortuary and on Monday from 10-10:45 a.m. at the church.
Burial will be in the Gusher Cemetery.

To order memorial trees or send flowers to the family in memory of Nial LaPreal Richens, please visit our flower store.