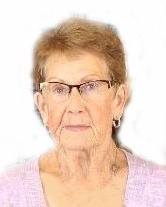 The Funeral Service will be live-streamed and can be viewed HERE.

NaDeane Horrocks, age 86, of Washington, Utah, formerly of Duchesne, passed away September 19, 2022, at her daughter’s home in Duchesne, from complications of cancer.
She was born June 22, 1936, in Price, to Luran L and Iva Fausett Allred.  She married Douglas Richard Horrocks on October 3, 1952 and they were sealed in the Salt Lake Temple on June 16, 1964.  He died November 11, 2013.
NaDeane was always on the go, doing for others and was active to the very end. She was a magnet for people of all kinds and gave of herself freely.  Making it her mission in life to be a thoughtful, kind and caring individual.  She enjoyed traveling, spending the month of August every year in the Book Cliffs with her husband hunting, shopping (especially for shoes), quilting, and knitting.  She worked at various jobs, notably as a truck driver for Uintah Freight where she was proud that in all her time driving, she only took out one telephone pole!
She was an active member of the Church of Jesus Christ of Latter-day Saints and loved to attend the temple as often as possible.      NaDeane and Doug moved to the Cherokee Springs retirement community in Washington, Utah, over twenty-nine years ago.  She really enjoyed living there and loved the people she became close friends with.  She played bingo and started a yoga class, and knew all of the “goings-on” with everybody.
NaDeane is survived by her daughters, Melna (John) Ibach, St. George; Diane (Brent) Lewis, Heber; Marilyn (Terry) Despain, Duchesne; 7 grandchildren, 19 great-grandchildren, 12 great-great-grandchildren; a sister, Iva Lou (Ron) Wadsworth, brother,
Byron (Linda) Allred, both of Price, and numerous nieces and nephews.
She was preceded in death by her husband, Doug; her parents; a sister, Bonnie Pulli and her husband Jim; a nephew, Keith Lowry; and a brother-in-law, Ted Peterson.
Funeral services will be held on Saturday, September 24, 2022, at 11:00 a.m. at the Duchesne 1st and 3rd  Ward Chapel, 130 S. 300 E.  There will be a viewing at the church that morning from 9:30-10:45 a.m.
Burial will be in the Strawberry Cemetery.

To order memorial trees or send flowers to the family in memory of NaDeane Horrocks, please visit our flower store.