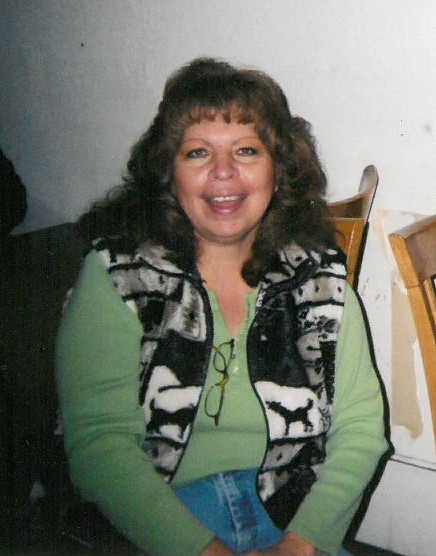 Mona Rae Velez, age 63, of Roosevelt, passed away February 7, 2018, at the Uintah Basin Medical Center.
She was born March 30, 1954, in Belcourt, North Dakota, to Roy Louis and Ida Jane Houle Gooden.  She married Conrad Joseph Velez on June 17, 1978, in Naples.
Mona was a member of the Turtle Mountain Chippewa Tribe of North Dakota, a nurse in her younger days and also a member of the American Indian Movement. After she had a family, she was then primarily a homemaker and her world revolved around her children and later her grandchildren.  She was an excellent cook, enjoyed cross stitching, and had an affinity for owls, which she has collected many owl figurines and toys.  She helped her mother and sisters make their native traditional Chippewa regalia.  She was known for wearing big jewelry and worked for Sather’s Jewelers for a time.
Mona had a magnetic personality and a good listening ear, and people – sometimes even total strangers –  would naturally open up to her.  She had a strength and willingness to always stand up for what she believed in.  She represented strength, courage, and heart.  She was humble and caring, yet firm and decisive.
She supported her daughters in all that they did, and took great joy in coloring with the grandkids and attending their sporting events and dance recitals.
Mona is survived by her loving and wonderful husband of almost 41 years, Conrad, daughters, Vegas Velez, both of Roosevelt; Venus (Thomas) Jenks, Ballard; grandchildren, Michael Dean & Araea Gia Dawn Mojado; Randon Lee Velez Jenks, Diante Joseph Jenks, Nakiah Sun Rae Jenks; sisters, Myrna Gooden (Fred Earnes), Texas; Myra (Edwin) Hartman, Altamont; Morna Gooden, Monae Gooden, both of Colorado; Monica (Delbert) Beston, North Dakota; and numerous nieces and nephews.
She was preceded in death by her parents, Roy & Ida Jane.
Funeral services will be held on Tuesday, February 13, 2018, at 11:00  a.m. at the Hullinger Mortuary.  There will be a viewing on Monday from 6-8 p.m. and from 10-10:45 a.m.
Burial will be in the Neola Cemetery.

To order memorial trees or send flowers to the family in memory of Mona Rae Velez, please visit our flower store.