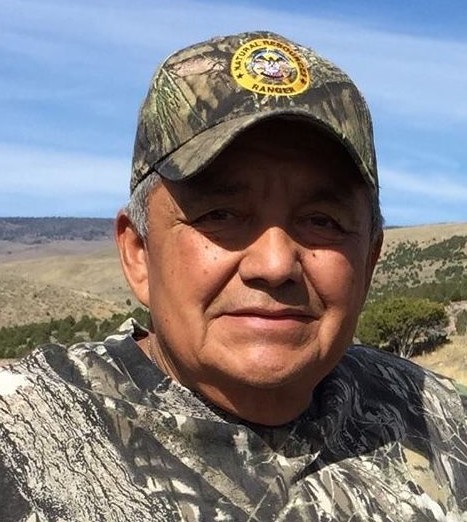 The family asks that you please wear a mask to all of the services.

Michael Arrowchis, Sr., age 71, of Ft. Duchesne, passed away October 10, 2021, at the Uintah Basin Medical Center.
He was born December 4, 1949, in Ft. Duchesne, to Bishop and Dorothy Mae Samora Arrowchis. He played football and wrestled at Union High School, where he received the nickname, “Boojie.” He married Janet Ridley, and they later divorced. He married Linda Hackford, and they later divorced. He married Connie Cleo Womack on April 29, 2000, in Ballard, Utah.
Michael served in the US Navy during the Vietnam War. He was a manager of the Bottle Hollow Marina, a truck driver for Target Trucking, a conservation officer for the Ute Tribe Fish and Wildlife, and helped release the first wild turkeys to be put on the Uintah and Ouray Reservation. He worked at the BIA Roads Department and Irrigation. He worked in the maintenance department and later as the Natural Resources lead ranger for the tribe. He was a member of the Native American National Fish and Wildlife Association.
In his younger days, he enjoyed fishing, but hunting became his favorite thing to do. He also was in a bowling league, played softball, coached softball, was a basketballer and really liked to cook. He rode his Harley Davidson and drove hot rod cars - specifically his Camero – as often as possible. He had great craftsmanship in making fans, roaches, and jewelry, and believed in his traditional ways as a Turkey Dancer and a Sundancer. He was active in the Catholic Church, serving on St. Helen’s Parrish Council, and was a member of the VFW Post 4519. The most important things in his life were his family and friends.
Michael is survived by his wife, Connie; daughter, Melisa (Chris) Arrowchis Pedraza, both of Ft. Duchesne; his granddaughter he was raising, Evalise Arrowchis; another special daughter, Stephanie (Jonathan) Cuch; grandchildren, Shay Wopsock (Chelsea Kidd), Sophia Arrowchis, Roberta “Bertie” Cesspooch, Jessica & Loreesa Black, Myah Cuch; siblings, Frank (Glenda) Arrowchis, Whiterocks; Smiley Arrowchis, Colorado; Lloyd Carl Arrowchis, Whiterocks; Marie (Kee) Zahne Arrowchis, Ft. Duchesne; and numerous nieces, nephews, and other relatives.
He was preceded in death by his son, Michael Jr.; daughter, Buffy Arrowchis; parents; siblings, Beverly Jean Arrowchis, Elaine Joyce Murdock, Lina Marie Arrowchis, Lloyd Carl, Jr., and parents-in-law, Stanley & Cleo Womack.
Funeral Mass will be held on Friday, October 15, 2021, at 10:00 a.m. at St. Helen’s Catholic Church. There will be a Rosary at 2:30 p.m. on Thursday followed by a viewing until 8:00 p.m. The family asks that you please wear a mask to all of the services.
Burial will be in the Neola Cemetery.

To order memorial trees or send flowers to the family in memory of Michael Arrowchis, Sr. , please visit our flower store.