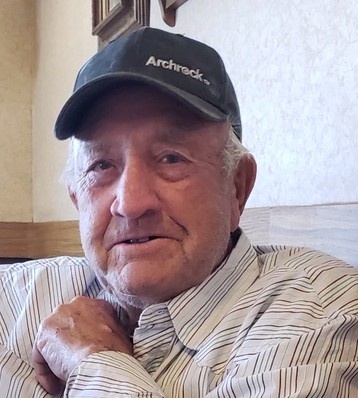 Merlan Murphy, age 82, passed away the morning of August 26, 2020 at his home in Roosevelt.
He was born October 19, 1937 in Bennett, Utah to LeRoy and Evah Clayburn Murphy.
He graduated from Union High School and soon enlisted in the Army.  He was very Patriotic and loved our country very much.
He married Maxine Wilcken in March of 1961.  They had 3 children together.  They later divorced.  He then met and married Linda Lawson who was the love of his life.  She brought 2 daughters who he raised as his own.
Merlan loved to work his farm and worked in the car industry for many years.  He also spent time working in the oilfield.  He was Ranch Manager for Ute Tribe Enterprise.  He knew most Ute Tribe members, he respected and was friends with many.  He was a member of the Duchesne County Cattleman and served on the board for Dry Gulch Irrigation.
He was loyal and considered everyone to be a friend.  He never spoke badly about anyone.  If did not like someone, the worst thing he would say was, “they are a little different.”
Merlan had many friends in the community.  He loved stopping off at the Frontier Grill each morning for his coffee and conversations with friends and was always ready to lend a hand or join in any adventure.
He was funny and such a tease!  He laughed at all the jokes everyone made, he even laughed at his own.
He loved his children, grandchildren, great grandchildren and his cows very much.
He is survived by his children, Marcia (Steve) Hanberg, Avalon, Utah; Shanna (Tony) Jeppesen, Roosevelt, Utah; Mike (Patricia) Murphy, Salt Lake City, Utah; Coralinna Lawson, Duchesne, Utah; Monica (Doug) Bailey, Craig, CO; his 11 grandchildren and 12 great grandchildren, brothers, Earl Murphy, Roosevelt, Utah; Reese (Elaine) Murphy, Leeds, Utah; Glen (Lora) Murphy, Roosevelt, Utah.
He is preceded in death by his beloved wife Linda, his parents, siblings, LeRay, Lois and Ron Murphy, a sister-in-law, Marilyn Murphy and his sweet dog Cheese.  Merlan will be missed by all who knew him.
Funeral services will be held Monday, August 31, 2020 at 11:00 a.m. at the Hullinger Mortuary.  A viewing will be held that morning from 9:30 - 10:45 a.m.
Burial in the Roosevelt Memorial Park with military honors presented by the Roosevelt American Legion, Utah National Guard and Patriot Guard Riders.

To order memorial trees or send flowers to the family in memory of Merlan Murphy, please visit our flower store.