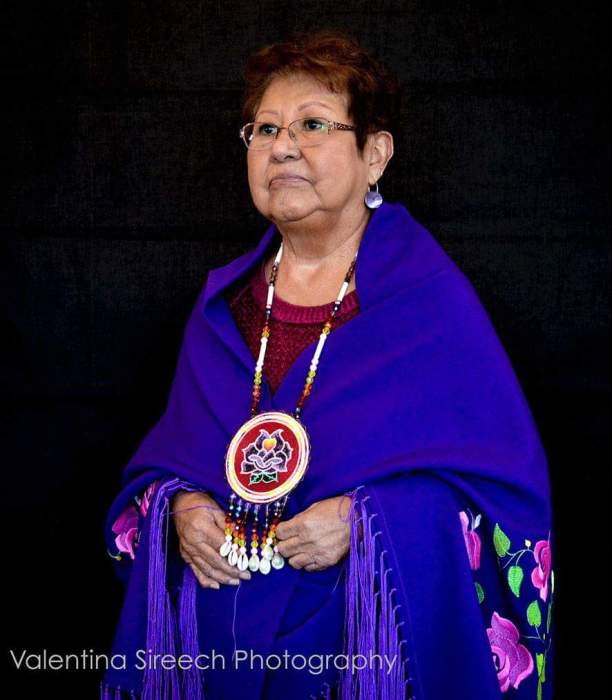 Millicent Maxine Natchees, age 74, of Randlett, passed away February 24, 2018, at the Utah Valley Hospital in Provo.
She was born April 2, 1943, in Ft. Duchesne, to Harvey and Clara Areep Natchees.
Maxine began her working career with th Bureau of Indian Affairs in Washington DC, she then moved back and worked at the Ute Indian Tribe as a secretary for the Business Committee, in the Public Liason Office, as Health Department Director, and as the editor for the Ute Bulletin for many years in Public Relations Department.  She ended her career with the Tribe as the Chairwoman for the Business Committee.  She served as the president of committee that was instrumental in starting the 4th of July Pow Wow and was a founding member of the VFW Post 4519 Ladies Auxiliary. She also had been a member of the Health, Education, and Water committees for the Tribe.  In her younger days, she was the Miss UBIC Native American Queen, and was a runner-up to Miss Indian America.  She also had toured across Germany with a traveling group that showed the Native American dances and traditions.  In 1969, she was named as Woman of the Year for the Business and Professional Women’s organization.  She was a life-long Democrat!
Maxine was an active member of the Native American Church and had a great knowledge of the Ute traditions which were taught to her by her grandparents and which she passed on to her children.  She was very fluent in the Ute language and loved to laugh.  In her spare time, she was a member of a bowling league, traveled, shopped, read books, watched politics on TV, did beadwork, and made beautiful traditional dresses.  She wasn’t afraid to speak her mind, and stand up for her people.  Education was a very big part of her life and she stressed it’s importance to her family and others.  She loved her son and helped her sister raise her daughters as her own.  She will be greatly missed.
Maxine is survived by her son, Mike (Carlene) Natchees, Neola; nieces whom she helped raise, Tavia Natchees (Jason Pendleton), Salt Lake City; Martine Root, Sandy; Elizabeth Root, Caitlyn Root, both of Randlett; 5 grandchildren; sisters, Amanda Natchees, Emeline (Lorenzo) Root, both of Randlett, and numerous other relatives and friends.
She was preceded in death by her parents, Harvey and Clara; grandparents, Boyce & Grace Areep, and Ed & Vera Natchees.
Funeral services will be held on Thursday, March 1, 2018, at 10:00 a.m. at the Ft. Duchesne Gym.  There will be a viewing at the Hullinger Mortuary until 8:00 p.m. on Wednesday.
Burial will be in the Ft. Duchesne Cemetery.

To order memorial trees or send flowers to the family in memory of Maxine Natchees, please visit our flower store.