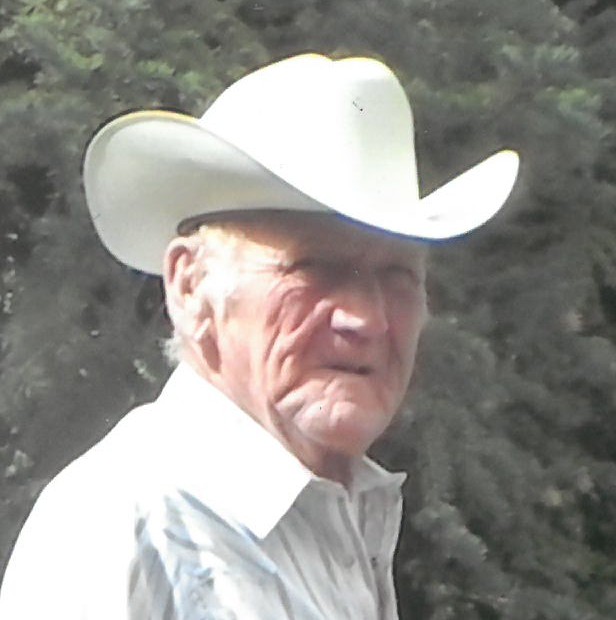 Max James Patry, age 85, of Roosevelt, passed away peacefully October 6, 2020,  surrounded by his family on the homestead his dad built, where Max and his wife lived for 55 years, where they raised four children, and later in life met and loved another daughter.
He was born March 4, 1935, in Upalco, to William Alice and Elva Carroll Patry.  He married Patsy Lee Atwood on March 11, 1965, in Lovington, New Mexico.  She died June 8, 2020.
Max was a cattleman for most of his life.  He received the “Old Timers” Award in 2016.  He was raised and believed in the old school fashion where a handshake meant a solid deal and your word meant everything.  He was a fair man and worked hard on his ranch, just like his dad and his grandfather before.  He loved his ranch and gave his all because he believed you work hard and you do it right.
He enjoyed going to the auction and often came back with an item or two even if he didn’t need it.  He had many friends whom he loved to spend time with and gamble.  You could often find him riding his 4-wheeler around just checking on his cattle.  His family and friends were very important to him and he was quick to help anybody in need.  He will be greatly missed by all who knew him.
Max is survived by his sons, Tim Patry, James (Lisa) Patry, both of Roosevelt; a daughter, Lisa Hall, West Valley City; grandchildren, Derek, April, Crystal, Tiffany, Tysen, Skyler, John, Levi, Brittiny, Briana, Billy, Rudy, Janae, David, Andy, Roxanne, and Brook; 35 great-grandchildren, and many honorary grandchildren – he loved and cherished them all.  He is also survived by a sister, Alyce Miller and seven very close nieces and nephews.
He was preceded in death by his wife, Patsy; his parents; a son, John “Bub” Robert; a daughter, Lavina Lynn Patry; a granddaughter, Rachel; and siblings, Gay Swenson, Carol Hollenbeck, and Billy Patry.
Graveside services will be held on Saturday, October 10, 2020, at 11:00 a.m. at the Roosevelt Memorial Park.  There will be a viewing that morning at the Hullinger Mortuary from 9:30-10:40 a.m.  Military honors will be presented by the Roosevelt American Legion.  Please bring your own chair.
The family would like to give a special thank you to the nurses, Amanda Goodwin & Chris Livingston of Canyon Hospice, who helped us through our time.  Max said they were the best!

To order memorial trees or send flowers to the family in memory of Max James Patry, please visit our flower store.