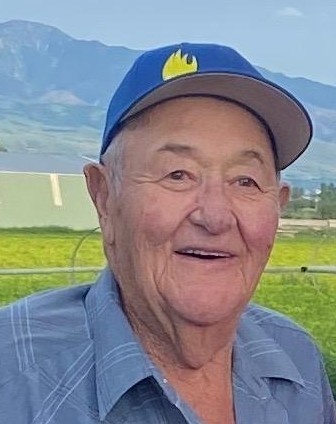 PLEASE NOTE THAT THIS OBITUARY HAS BEEN PLACED ON OUR WEBSITE AS A COURTESY TO THE FISHER FAMILY.  HULLINGER MORTUARY IS NOT HANDLING THESE SERVICES.

Max George Fisher, 80 passed away peacefully, August 16, 2020, surrounded by his family.
Max was born in Roosevelt, on April, 23, 1940.  He was the first son of George and Larue Fisher.
He grew up on a farm in Altonah, Utah. As a kid he loved horseback riding and spending time with friends.
He married Joyce Kay Beal on November 4, 1960. They were later sealed for time and all eternity in the Provo temple on January 21, 1994.
They operated a grade A dairy as they raised their 3 children. Later changing to raising beef cows. This gave him the opportunity to instill in his family values such as hard work, honesty and integrity. He loved having a good Appy horse, a good dog and a herd of cows. In 2002 they moved to Bennington, Idaho. He raised Belted Galloway cows for several years. He bred one of his Galloway cows to a buffalo and on his third try he finally got a belted buffalo. He loved spending time with family and had many friends.  Max and Joyce would spend the winters in their later years in Littlefield, Arizona. They loved going on side by side rides with their friends and he won many shuffleboard tournaments.
In his later years he restored a 1956 Mercury like the one he owned as a teenager. It took him 14 long years and was his pride and joy. He was able to show it in 6 car shows.
Max was an active member of the Church of Jesus Christ of Latter-day Saints. He served as a temple worker for 4 years in the Vernal temple and 2 years in the Logan temple.
He is survived by his wife of 60 years, their 3 children, Diane (Darren Olsen), Eddie (Cassandra), Dan (Tamara), 11 grand-kids and 16 great grand-kids.
There will be a viewing Thursday August 20, 2020 from 6:00 pm - 8:00 pm at the Matthews Mortuary, 702 Clay St. Montpelier, ID.
A graveside service will be held Saturday, August 22, 2020 at 12:00 p.m. at the Altamont Cemetery.

To order memorial trees or send flowers to the family in memory of Max George Fisher, please visit our flower store.