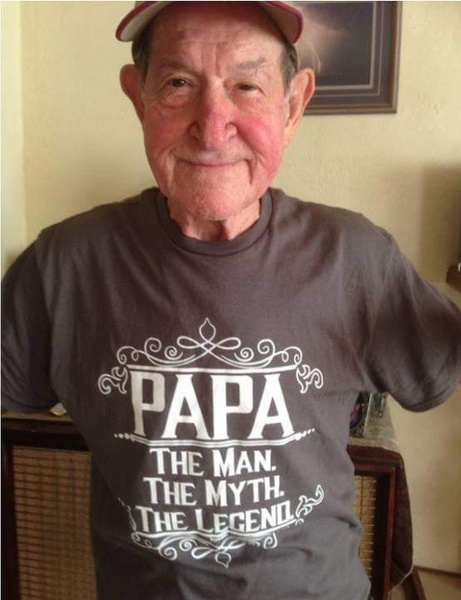 Mario Andrew “Pops” Croce, age 95, of Roosevelt, passed away May 27, 2021, at the Uintah Basin Medical Center.
He was born December 11, 1925, in Detroit, Michigan, to Frank and Anna Pace Croce. He married Carol Higgins and they celebrated 65 years of marriage before her death on April 8, 2020. He served in the US Navy during World War II and was stationed in many places as a cook.
Being the child of Italian immigrants, and other than his time in the Navy, he lived the majority of his young adulthood in Michigan, until he got permission to leave the “Family Business” and move to California. He was a good cook and worked in many restaurants throughout his life, his last being Kody’s Café in Roosevelt. He also worked many years at Kody’s Fitness, retiring when he was almost 88. Ever since he was a child, he had a passion for baseball and played in various leagues during his life. He was a character, and had a good sense of humor.
Mario loved his family and they were his first priority. He always found a way to put food on the table and take care of them. He also had an “unlocked front door policy” where anyone and everyone was welcome, and he took many people in and treated them like they were one of his own. “Pops” was very much loved and will be deeply missed.
Mario is survived by his daughter, Anita Kelly; her son, Mario and his wife Jodie Beaver Croce; extended children, Cliff Conover, Ed Puckett, and Leanne Jones Snyder; grandchildren and great grandchildren, Micki Arguello and her two children Meggan and Desean; Tawnya Clovis and her son Kai; Rhiannon Garcia and her son Gabriel; A.J. Croce and son Kai; Eddie and Tristen Puckett and their son Kade; Chris and Megan Puckett and son Landen; Brandon and Megan Jones and their three children; Desiree and Heath Williams and their two daughters, Lexi and Abby; Brianna Snyder, Kody Conover, Jordan Barnard, and Zayne Starr.
He was preceded in death by his wife, Carol; daughters, Suzi DeMichael, Kitty Conover and Diana Barnard; and his sister, Orsella Mairanna.
His wishes were to be cremated.
Memorial services for Mario and Carol will be held at 3:00 PM on Saturday, June 19, 2021, at the Roosevelt Baptist Church.

To order memorial trees or send flowers to the family in memory of Mario "Pops" Croce, please visit our flower store.