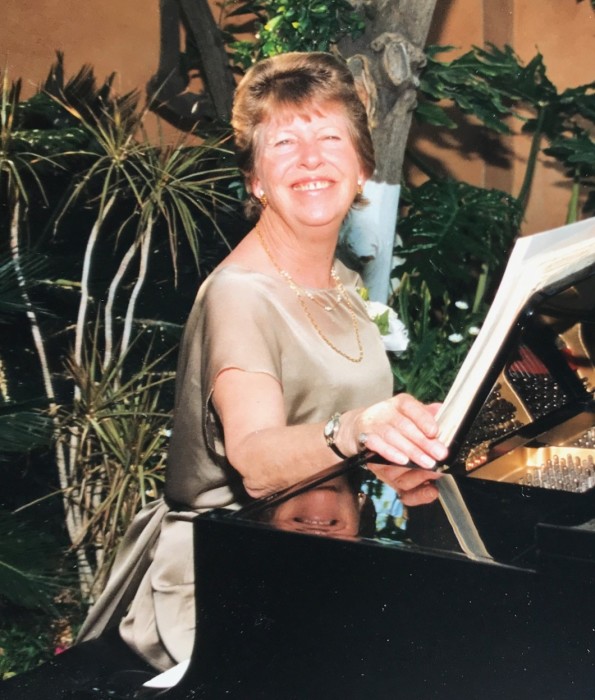 Margot Elaine Adams, age 75, of Gusher, passed away February 11, 2018, at her home.
She was born October 6, 1942, in Croydon, England, to Edward and Ada Lillie Rayner Philp.  She was schooled at St. Mary’s Academy of London while also studying piano at the Royal School of Music.
She had a grant to attend Oxford, but met James Adams at a high school dance and they were married after graduation.  They had two daughters, moved to California, and later divorced.  Shortly after, she moved to the Uintah Basin and met Frank Ferguson.  They were together for almost 30 years when he died September 20, 2014.
Margot worked for KNEU Radio station when she first moved here and then was the pianist for the choirs at Union High School and Roosevelt Jr. High.  She loved the children and was always willing to help anyone.  She enjoyed knitting and sewing and used those skills to make little dresses which she often sold at the Holly Fair.
She is survived by her two daughters, Heather (John) Heroux, Manhattan Beach, California; Sheila (Joey) Staples, Chandler, Arizona; and grandchildren, Cole, Grace, Brooke, and Trevor.
She was preceded in death by her companion Frank Ferguson, a sister, Pauline Philp, and a brother, Nick Philp and Graham Philp.
Funeral services will be held on Monday, February 12, 2018, at 10:00 a.m., at the Hullinger Mortuary with a viewing from 9-9:45 a.m.
Per her wishes, she will be cremated and then the cremated remains will be interred in the Gusher Cemetery.  Condolences may be shared at www.hullingermortuary.com

To order memorial trees or send flowers to the family in memory of Margo Elaine Adams, please visit our flower store.