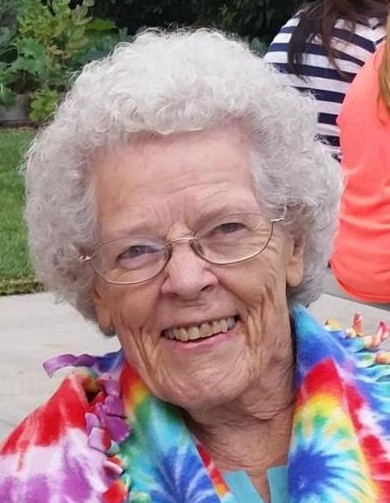 Julia Margene Mantle Ashby, age 90, of Roosevelt, passed away peacefully of natural causes surrounded by family members on September 6, 2019 in Roosevelt, Utah.
Margene was born on Feb. 13, 1929 in Murray, Utah to Willford R. Mantle and Amanda Knight Haws. She met Clarin Dee Ashby at a Murray High School Dance where Clarin left the upright bass he was playing to ask her to dance and they continued to dance together for the next 70 years that ended when Clarin died in 2014.
Margene and Clarin were married in the Salt Lake LDS Temple on Sept. 16, 1948. Clarin pursued the newspapering profession and Margene was at his side every step of the way while also developing her own talents and making a positive impact on lives wherever they lived.
The couple had five children -Jean (Ralph) Ercanbrack, Kevin (Sandra), Craig (Colette), Kaelyn (Randy)Meyers, and Sharon. Margene has 28 grandchildren and 54 great grandchildren and 13 great great grandchildren.  Margene was preceded in death by her husband Clarin, her mother and father Willford R. Mantle and Amanda Knight Haws, her brother Ralph Mantle and sister Roann Moulton, two granddaughters, Jessica Ashby and Aleese Meyers and Hector Garcia a grandson-in-law.
Margene's path through life started in Murray. She and Clarin made a positive contribution in each of the communities they lived which included Preston, Idaho; Provo, Utah; Castle Dale, Utah; Roosevelt, Utah; Morrisville, Pennsylvania; Salt Lake City, Utah; and then back to Roosevelt where they retired.
She worked closely with Clarin in the newspapering businesses as they owned The Emery County Progress in Castle Dale and the Uintah Basin Standard in Roosevelt. But it was her talents in music, especially singing and playing the piano that was enjoyed by thousands. Their home was always open to church and community singing groups. A partial list would include a 16 voice group in Roosevelt that sang numbers from Handel's Messiah, a variety of quartets and soloists and many others in need of a piano player and a room to practice in.
Margene was most known for being creative with sewing, crocheting, and needle work. She spent hundreds of hours perfecting her skills.  She created multiple masterpieces over the years, some of them winning ribbons in local fairs. Margene was also active in the local 4-H program teaching sewing and cooking.
Margene will be remembered for her kindness and love of others. Most recently she played the piano for LDS church services in the Villa and Parkside Manor plus, she spent many years playing the piano and organ in the wards and stakes where she lived. Margene was always sharing her musical talents, but she also perfected the art of being a friend, a peacemaker, and a true follower of Christ as she shared what she had with others. Her home was always open to anyone who was in need including three different foster sons and daughters and numerous "adopted" family members who needed a place to stay.
Much of her life was spent supporting Clarin in the newspaper business, but once the couple retired from publishing both she and Clarin deepened their love for music and youth as they became involved for several years with the "America's Youth In Concert" program. Here, they helped recruit young musicians to participate in a month long performance tour for both choir and orchestra musicians across Europe.
Margene and Clarin also served two very successful missions in Australia for the Church of Jesus Christ of Latter-day Saints and once again her talents and ability to interact with others were great assets in their success. Margene also served as organist in the Vernal Temple.
If life's success were measured by the list of true friends one has made, then Margene's success is one of the most notable. But, she was also successful throughout her entire life in obtaining and then sharing a loving testimony of Jesus Christ, his teachings that when followed bring so much joy, and in knowing that families can be together forever. Living a Christ-like life by being willing to share time, talents, money, food and lodging with many who were in need, made her loved by all she knew and gave her a reassurance that she knew she was a child of a kind and wise Heavenly Father. This was her example to others for success.

Funeral services will be held on Saturday, September 14, 2019, at 11:00 a.m. at the Roosevelt West Stake Center of the Church of Jesus Christ of Latter-day Saints.  There will be a viewing on Friday from 6-8 p.m. at the Hullinger Mortuary and then on Saturday from 10-10:45 a.m. at the church.

Burial will be in the Roosevelt Memorial Park.

To order memorial trees or send flowers to the family in memory of Margene Ashby, please visit our flower store.