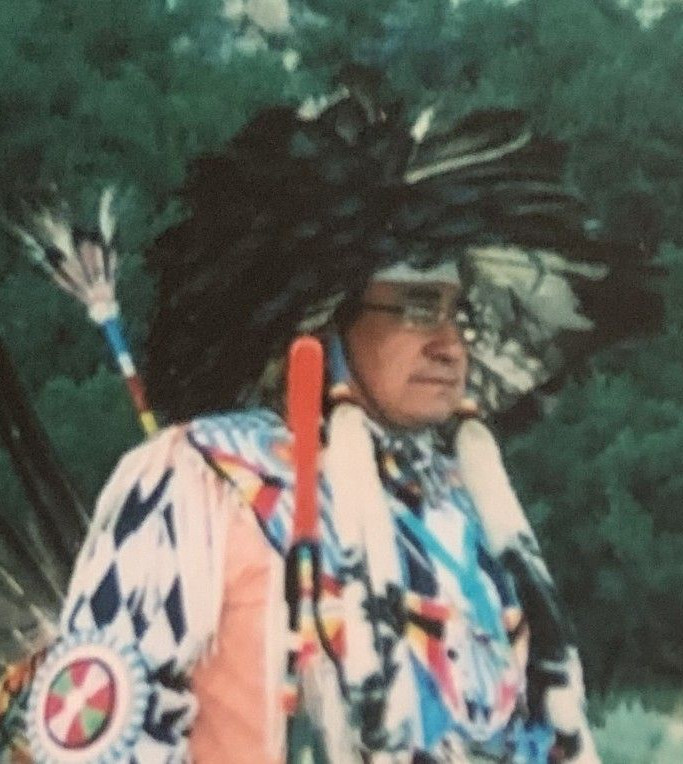 Lynn Ray Burson, age 66, of Ft. Duchesne, passed away October 7, 2021 at the Utah Valley Regional Medical Center of COVID.
Lynn was born March 8, 1955 in Roosevelt to Leonard Richard and Eva Johnson Burson. He married Louise Ridley.
Lynn was an avid hunter, both with bow and gun, he liked fishing, and watching WWE on Monday evening. He loved riding his Harley, traveling to Wendover and riding in poker runs. He liked stopping and eating at his favorite diners. He enjoyed watching “Finding Bigfoot” & “Skinwalker Ranch”. He was a jack of all trades, fixing his truck, motorcycle and anything else that needed repair. He had a black belt in karate, and star football player in Lawrence, Kansas. He was a champion traditional dancer throughout Indian country, with his wife, kids and grandchildren every year. His presence will be missed greatly by his Pow Wow family throughout the USA & Canada..
He was a hard worker all of his life, mostly living and working on the Uintah and Ouray Reservation in Ft. Duchesne, working from a young age of 16 until he retired. He worked on oil rigs working himself up to a Rig Supervisor with an all Native work crew. He was a heavy equipment operator throughout the years for the BIA and as a contractor for irrigation and around his own home. You could often see him working around his home, at work or on the road on his heavy equipment , keeping himself busy.
In his free time, most could see him and Louise from time to time enjoying themselves taking motorcycle rides on their bikes locally, on poker runs and of course going to Wendover to gamble.
He loved his family and delighted in spending time with each of them and will be missed greatly all of his family, including many nieces nephews, and grandchildren.
He is survived by his wife, Louise Burson, children, Ryan Burson, Jillion Burson (Anthony Serra Burgros, Sr.), Ray Burson, Jenna (Conroy) Reed and a granddaughter that he helped raise, Dorice Burson, grandkids, Kali Cuch, Dorice Burson, Rylan Burson, Beltran Rojas, Ryan Burson, Jr., Enrriqueta Rojas, Milagros Rojas, Caide George Burson, Wylee Reed, Chloe Reed, Anthony Lynn Serra Burgos, Jr., Zane Runninghorse, Takja Barton, Yupyia Barton, Charlie Barton, Kye Owna Miller, Amyan Miller, Taylor Smith, Eva Smith, DeRon, Leron, Jeron, Tyron, Ronajya, Ronalehia Rousseau, Thane Wopsock, Dominick Stoney Vestal, Jaiden Montijo, Moses Serawop, Dallen Duran, Jvon Nahnisits Reed, great grandkids, Eric Randolph, Herrny Burson, Klayson Rex Murray, Orsen Little Eagle, Jaiden Blackbird, JVon Smith, Jr., X’Sira Miller, Josiah Miller, Martin Gonzalez, III, and numerous nieces, nephews and cousins. His siblings, Marie Miller, Everett Burson, Geraldine Burson, Faye Burson, his wife’s family, Zozette Gates and Debbie Ridley.
He is preceded in death by his parents, siblings, Marion Miller, Duane Miller, Mary Miller, Ollie Cuch Burson, Mildred Burson, Leroy Miller, family-in-laws, Zane Ridley, Randolph Ridley, Tommy Ridley, Eric Ridley, Patsy Ridley, and Jacob Gates.
Funeral services will be held on Wednesday, October 13, 2021 at 10:00 a.m. at the Hullinger Mortuary. Viewings will be on Tuesday until 6:00 p.m. and Wednesday from 9:00 - 9:45.
Burial will be in the Red Knoll Cemetery.

To order memorial trees or send flowers to the family in memory of Lynn Burson, please visit our flower store.