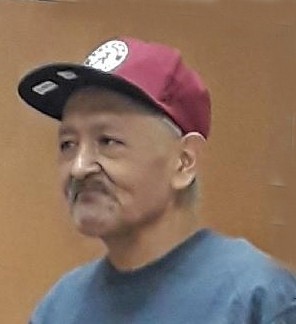 Lucas Ray Black, age 56, of Roosevelt, passed away peacefully September 12, 2018, at his home surrounded by his family.
He was born December 28, 1961, in Roosevelt, to Wilbur Billy and Pauline Checora Black.  He married Paula Cesspooch on December 3, 1996 in Salt Lake City.
Lucas worked as contract laborer with the Tribal Justice Center.  He had many years of work experience working in the oilfield and construction work in all phases from building to cement work.  He enjoyed gambling, hunting, fishing, being in the outdoors, and in his younger years, playing sports.  He really liked to cook and barbeque and was very talented at it.   He had a great sense of humor and joked with and teased his in-laws incessantly and mercilessly.   He was Sundancer and participated in Traditional Sweats.  He was active with his Alcoholics Anonymous and Narcotics Anonymous groups and helped with their sobriety programs.
His favorite thing to do, especially near the end, was spend time with his family.
Lucas is survived by his wife, Paula, of Roosevelt; children, Nikki (Anthony) Winters, Farris Tahreep, both of Salt Lake City; Davy Ray Black, Ft. Duchesne; Teanika Ray (Taylor) Tate, Butch Woodard, both of Vernal; 14 grandchildren, one great-grandchild on the way; brothers and sisters, Betty Reid, Tonalee, AZ; Lorenzo Black, Ft. Duchesne; Mike (Rachael) Huff, Mountain Home; Teresa (Charles Headress), Ft. Duchesne; Rosemary Black (Richard Begay, Jr.), Roosevelt; Bertha (Manuel Melendez), Reno, NV; Ryan Black, Ft. Duchesne; Tonya Blackhorse (Vanessa Bird), Portland, OR; Sandra Black (Sheldon Begay), Derek Black, both of Ft. Duchesne; aunt, Angela (Dale) Shavanaux, Ft. Duchesne; parents-in-law, Annette& Edward Pusher; and numerous nieces, nephews, and other relatives.
He was preceded in death by his father, Wilbur; his siblings, Joseph, Dino, and Wilbur Jake; grandparents, Frank Checora, Carrie Yump Mountain, Suzy Nez, and Wilbur Blackhorse, Sr.
Funeral services will be held on Saturday, September 15, 2018, at 10:00 a.m. at the Ballard LDS Chapel.   He will be taken to his mother, Pauline Black's, home in Ft. Duchesne  on Thursday after 5:00 p.m.  On Friday, he will then be moved to his home for a wake.
Burial will be in the Ft. Duchesne Cemetery.

To order memorial trees or send flowers to the family in memory of Lucas Ray Black, please visit our flower store.