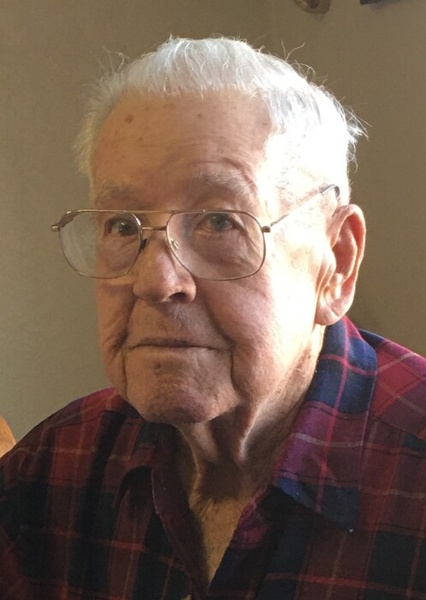 Lowell David Thacker, of Neola, passed away February 9, 2021, at the age of 92.
He was born September 9, 1928 in Charleston, Utah, to Charles David and Alice Wagstaff Thacker.  He married Colleen McNeil from Francis, Utah, in 1949 after meeting at a dance in Killcare and they enjoyed 66 years together. They were sealed in the Salt Lake Temple in the late 60’s.  She died November 21, 2015.
Lowell worked with his dad as a boy on the farm, hauled lumber with an oxen team going down Provo Canyon alone at age 8, herded cattle and sheep in the mountains around Daniels Canyon and Lake Creek.  He also worked for State Road, at the mine in Park City, and for Geneva Steel. He had a pilot’s license that was used for aerial Search and Rescue, Forest Fire watch, finding missing livestock, and the occasional flight with his kids that gave them “jelly in the belly”.  For five years he was with Heber City Police, two of those as Police Chief.  He retired with Utah Fish and Game after twenty-seven years, twenty-four of those were living at Whiterocks Fish Hatchery.
Lowell had stories he shared with family and friends all his life about growing up and the changes during his lifetime.  He met and stayed friends with people from all facets.  When they would meet up and swap the old stories, it was a good time.  He told us many times that at a very young age he was attracted to horses and accused of ‘clinging like a burr’ when riding bareback.  When his grandkids came along, he had a work horse that would pull a wagon and take all for a ride.  Many great memories came from those rides at family get-togethers.
He loved where he lived in Whiterocks and Neola and the friends who supported each other through good times and bad for over fifty years, but a part of his heart stayed in Heber Valley and friends there.  He will be buried in Heber City alongside much of his family.
Lowell was known for cooking chicken-on-the-barrels for annual Ward parties, his help with Boy Scouts and helping others.  He will be greatly missed by many.  Family members are proud of all he represented and taught them in their lives.
He is survived by five children:  LaRae (Larry) Taylor; Duane (Jackie) Thacker; Jane (Rodney) Rasmussen, all of Roosevelt, Neil (Debbie) Thacker of Bixby Oklahoma, James (Becky) Thacker of Roosevelt; 13 grandchildren, 17 great grand and 2 great-great grand.
He was preceded in death by his parents, wife, a son who died at 3 months of age, 11 brothers and sisters; LaPrele, Ida, Lela, Lois, Heber, VanNess, Luella, Mae, Floyd, Carma and Lyle.
Funeral services will be held on Tuesday, February 16, 2021 at 10:00 a.m. at the Hullinger Mortuary with a viewing from 9:00 - 9:45 a.m.  Due to COVID-19 guidelines, the funeral is for immediate family only.  However, the live-stream of the funeral and graveside viewed here or the link below the service information.
Burial will be in the Heber City Cemetery at 1:30.

To order memorial trees or send flowers to the family in memory of Lowell David Thacker, please visit our flower store.