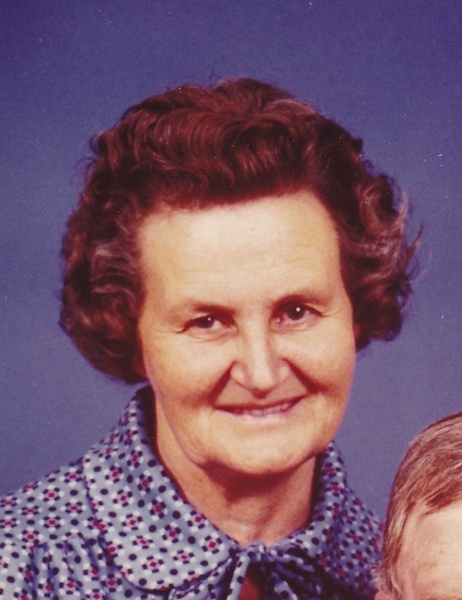 Lola Penfold Clark , age 94, passed away January 23, 2020 in Roosevelt, Utah, at the Uintah Basin Medical Center, surrounded by her family.
She was  born on a snowy Thanksgiving morning, November 26, 1925, to Walter Eugene and Charlene Longacre Penfold, in Deep Creek (Tridell), Utah.  She was the fifth child in a family of eight children.
Lola’s early years were spent roaming the hills of Deep Creek on the family farm.  Helping to herd sheep and cattle, helping her mother with the gardening and doing other farm duties. If she could, she would rather stay in the house and sew, but this was not very often she got that luxury.  When she was 13 years old, the family moved from Deep Creek to Fort Duchesne, Utah.  This is where she met her neighbor and future husband, Iseral Justus “Jay” Clark.  After a short courtship they were married in Vernal, Utah on December 24, 1942. This union was sealed in the Salt Lake Temple on October 3, 1945.  He died July 3, 2012.   Soon after they married they moved to Idaho to help Judson Mabey with his sheep herd.
With the outbreak of World War II, Jay felt it his duty to serve his country, so they returned to Utah and Jay served his country faithfully.  During his time of service, Lola lived with her parents and the couple was blessed with a son; a little boy who would have to wait several months before he could meet his father in person.
After the war, Jay and Lola with their small family, lived in the country, often in remote places as they helped several employers care for their sheep and cattle.  Lola was always there to support Jay in all his endeavors.  It was a life long dream of Lola to own her own home and that dream came true when they were able to buy a house in Lapoint, Utah.  However in 1972 Jay was offered a job in Grantsville, Utah to manage a Church welfare ranch. This was a hard move for Lola, it meant leaving her home .  But as in many times previously,  she was supportive and made this move, leaving behind her home and most of her children. This took up a large part of their married life.   They lived in Grantsville for 34 years before returning to the Uintah Basin and her home.
Lola was a woman of many talents.  She loved to crochet, knit, do embroidery, piece and quilt quilts, often gathering her sisters together to have a good old quilting bee.  These were skills that she love to teach her children and grandchildren.  One of her favorite past times was gardening, both fruits and vegetables and many flowers.  She spent many hours preserving and storing those things that she raised in her garden.
Lola was a faithful member of the Church of Jesus Christ of Latter-Day Saints, serving faithfully in many callings in Primary, Young Women’s and the Relief Society. She loved to participate in the ward choir and listen to good music.  Through her Church service, she had a great influence on those whom she taught and served.

One of Lola’s most cherished assets were her family.  She loved being a mother and a grandmother.  She was very proud of her family.
Lola is survived by her children, Theron Jay (Ronda) Clark, De Beque, CO; Tiny Max (Mary Lee) Clark, Lapoint; Evon (Barry) Thompson, Theda (Kendall) Scholes, Ada (Guy) Betts, David H Clark, all of Roosevelt; Dixie (Mark) Anderson, Grantsville, UT; sisters, Vona Walker, Vernal; Rose Anderson, Coleman, OK; brothers, Chauncy Penfold, Youngsville, LA; Everett Penfold, Washington; twenty-seven grandchildren, seventy great-grandchildren and twelve great- great-grandchildren.
Funeral services will be Saturday, February 1, 2020, at 11:00 a.m. at the Roosevelt 2nd & 11th Ward, 250 West 200 North.  There will be a viewing on Friday at the Hullinger Mortuary, 457 E 300 N, from 6-8 pm and on Saturday from 10-10:45 a.m. at the church.
Burial in the Lapoint Cemetery.  Condolences may be shared at www.hullingermortuary.com
The family wishes to express sincere thanks to the loving staff at Parkside Manor, and to Dr. Garcia and the ICU Staff at the Uintah Basin Medical Center. You truly did a wonderful job in caring for Lola.

To order memorial trees or send flowers to the family in memory of Lola Clark, please visit our flower store.