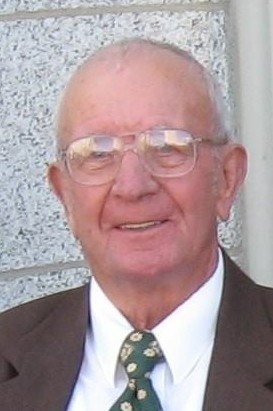 Lester Henry Bartlett, age 96, of Tridell, passed away September 5, 2018, at the Uintah Basin Medical Center.
He was born February 12, 1922, in Tridell, to George Henry and Clara Louisa Bingham Bartlett.  In his younger days he loved spending the summers up at Paradise Park helping in the family sawmill business.  He spent many days working and playing in the mountains.
He was drafted into the United States Army and served during World War II.  Shortly before being discharged, he married Fern Cook on August 28, 1945, in the Salt Lake Temple of the Church of Jesus Christ of Latter-day Saints.  She died June 28, 2013.
Lester was a talented woodworker and made many items of cabinetry, dressers, and shelves that are still in many homes in the area today.  He also worked as a mechanic, a school bus driver and kitchen worker at the small Whiterocks school, a lumber hauler for his dad and then Thomas Lumber Co, and had a saw sharpening business. He enjoyed fly fishing, being in the mountains, and hunting when he got the chance.
He was an active member of the Church of Jesus Christ of Latter-day Saints and had served as a Bishop, High Councilor, Ward Clerk, ordinance worker in the Provo and Vernal Temples, and as a Sealer for 13 years.  He was exact in his measurements and living the Gospel of Jesus Christ.  He loved his family and spending time with them, even though much of it was just sitting in silence because of his very quiet nature. He was well respected by all who knew him.
Lester is survived by his children, Joyce (Val) Evans, Sandy; Nina Webb, Tridell; Fred (Kamme) Bartlett, Duchesne; Rulon Bartlett, Roosevelt; Neil (Janet) Bartlett, Vernal; Cathy (Rodney) Millett, Green Bay, Wisconsin; 25 grandchildren, 59 great-grandchildren, and 8 great-great-grandchildren.
He was preceded in death by his wife, Fern; a son, Boyd Lynn Bartlett; his parents; all of his 11 siblings; grandchildren, Jason Nephi & Tyler Allen Webb, Mark Fietkau Evans; and a son-in-law, Milo Webb.
Funeral services will be held on Friday, September 14, 2018, at 11:00 a.m. at the Tridell LDS Chapel.   There will be a viewing on Thursday from 6-8 p.m. at the Hullinger Mortuary and from 9:30-10:45 a.m. Friday at the church.
Burial will be in the Tridell Cemetery with military honors by the Roosevelt American Legion, the Patriot Guard Riders, and the US Army Honor Guard.

To order memorial trees or send flowers to the family in memory of Lester Henry Bartlett, please visit our flower store.