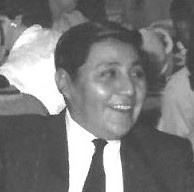 Leon George Perank, age 85, of Ft. Duchesne, passed away February 12, 2020, at the Uintah Basin Medical Center.
He was born December 28, 1934, in Myton, to Eugene and Gladys Coho Perank.  He married Mary Ann Quiyaga on June 7, 1955, in Ft. Duchesne.
Leon had many occupations with the Ute Indian Tribe.  He was a communications officer for the police department, on the surveyor’s crew for the road department, was a Tribal Judge, and served two terms on the Business Committee.  He enjoyed camping, being outdoors, and driving around and traveling with Mary.  He participated in Sundances, and loved to watch his grandkids dance in the Pow Wows.
Leon is survived by his wife of sixty-four years, Mary Ann, of Ft. Duchesne; step-son, John Angel, Ft. Duchesne; nephews, Wayne (Jolene) Perank, Stewart Pike, both of Neola; Vaughn Pike, Neola; nieces, Eldora Perank, JoAnn Perank, grandchildren, Cherokee (Jordanelle) Angel, Annie Angel, Haley Angel, Emera Arkansas; and numerous nieces and nephews.
He was preceded in death by his parents, Eugene and Gladys; siblings, Clara Jack, Amos Perank, Nellie Perank, Charles Perank, Hedrick Perank, and Etta McCurdy.
Graveside services will be held on Saturday, February 15, 2020, in the Myton Cemetery.  Prior to the graveside there will be a final viewing at the Hullinger Mortuary beginning at 10:00 a.m.

To order memorial trees or send flowers to the family in memory of Leon George Perank, please visit our flower store.