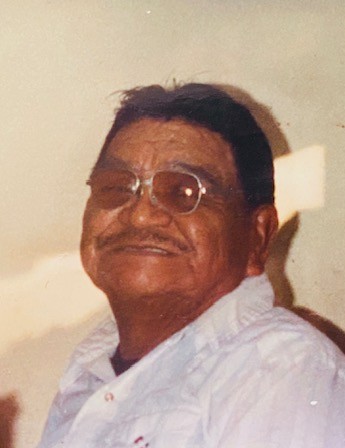 Lee Johnson Alhandra, age 96, of Roosevelt, passed away February 7, 2020, at his home.
He was born August 28, 1923, in Ft. Duchesne, to Sam and Mamie Johnson Alhandra.  He married Lena Marie Cesspooch Serawop and she passed away June 26, 2010.
Lee was the last surviving World War II Nothern Ute Tribal member.  He served in the US Army with Company F, 28th Infantry, 8th Infantry Division.  He left the US on 17 Nov 1943 to the European Theatre of Operations (ETO) and returned back to the US on 6 July 1945.  He participated in 4 campaigns starting at Normandy and ending in Central Europe towards the end of the war.
He had worked as a conservation officer for Energy & Minerals and as a policeman for the Southern Ute Tribe.  He was a heavy equipment operator and preventive maintenance surveys and safety specialist, a search and rescue officer, Ute Research chemical laboratory analysis technician, and diesel engine mechanic – all for the Northern Ute Tribe.  He enjoyed hunting, fishing, farming, gambling, going to Wendover, riding horses & ATVs, and traveling.  He took part in Sundances, Peyote Meetings, Pow- Wows, and played Handgame.  He helped raise most of his grandkids, and his favorite thing was family gatherings.
Lee is survived by his daughters, Glenda Alhandra-Harris, Roosevelt; Charlene (Jersinio) Apolinario, Roosevelt; step-children, Susan Serawop, Roosevelt; Alonzo Serawop, Vernal; numerous grandchildren, great-grandchildren, and great-great-grandchildren.
He was preceded in death by his wife, Lena; his parents; children, Margaret & Leland Alhandra, Lizabeth Kent; siblings, Owen Alhandra, Fred Mart, Emma Mart Sireech, Damie Mart, Amy Alhandra, Patsy Shavanaux, May, Louise, and Owen Alhandra; and several grandchildren and other relatives.
Funeral services will be held on Wednesday, February 12, 2020, at 10:00 a.m at the Randlett Community Building.  There will be a wake after 4:00 p.m. at the community building on Tuesday.
Burial will be in the Randlett Cemetery with military honors presented by VFW Post 4519 and American Legion Post 22

To order memorial trees or send flowers to the family in memory of Lee Johnson Alhandra, please visit our flower store.