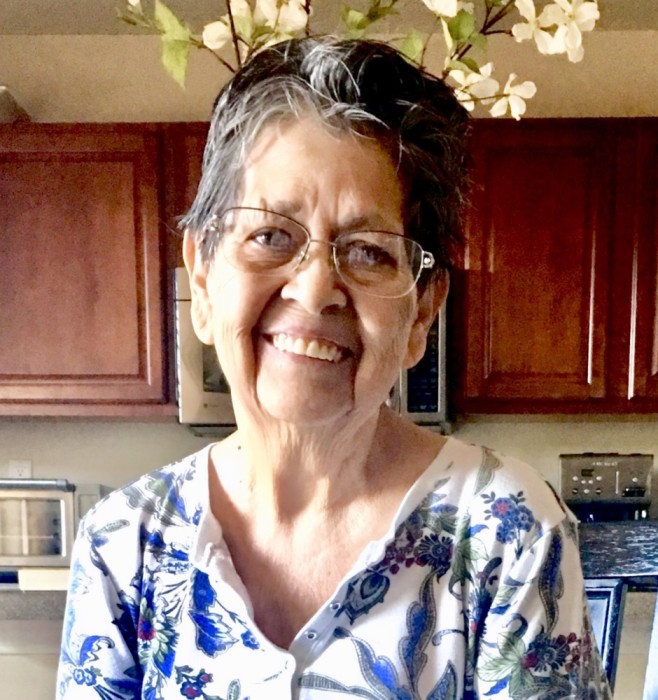 On August 14, 2018, Lea Marie LaRose Valdez, 76, walked on peacefully into her afterlife on a warm summer night accompanied by her family at her bedside. A hallmark of her life was her nurturing and affection for all of God’s creations. She cherished the nurturing of her children, Gina Theresa Stevens, Maria Elena Stevens and Bartholomew “Bart” Stevens, and his wife Jacqueline, and her precious grandchildren Heather Rene Altaha, Jesse Albert Hooke, Mika David Hooke, Lori Jane Stevens, Adrian Matthias Stevens, Ian Chas Stevens, and her sister Clare Christine LaRose all of which she considered the best gifts of her life and cherished them all dearly.

She was born on July 16, 1942 to Albert Leonard LaRose and Mary Theresa Kniffin LaRose in Mescalero, New Mexico. As a child Lea lived in many different places as her parents work took them around Indian Country. Lea and her family, including her brother Rex Albert LaRose and sister Clare are proud members of the Shoshone – Bannock Tribes of the Fort Hall Indian Reservation in Fort Hall, Idaho. In her younger years Lea lived briefly in San Carlos, Arizona and it was here in the fourth grade where she first met Charles Stevens, her future husband.

Lea was an avid reader and possessed a very large book collection of which she treasured. She also loved to crochet, cook and was famous for her delicious homemade yeast rolls and pies. Lea always had a poodle by her side and loved all of God’s four legged creatures. Lea was also willing to help others in their time of need. Harold Keefee, Relonzo Duane, Andrea Patten and many others spent time in Lea’s home.

After Lea and Charles divorced, she married Rudy Aldonious Valdez, in Salt lake City, Utah where she made her home for nearly thirty years. She took pride in her career as an accountant with the Associated Regional University Pathologist (ARUP) where she worked for nearly three decades. Earlier in her career she worked for the US Department of Interior’s Bureau of Indian Affairs in San Carlos, Phoenix and Fort Duchesne; she also was employed by the San Carlos Apache Tribe and the Ute Tribe in Fort Duchesne, Utah.

Lea was be taken to St. Charles Catholic Church in San Carlos on Friday August 17 at 4:00 pm. Rosary was at at 6:00 pm. Funeral Mass was Saturday at 10:00 am with interment at the Mormon Hill Cemetery.

To order memorial trees or send flowers to the family in memory of Lea Marie Valdez, please visit our flower store.