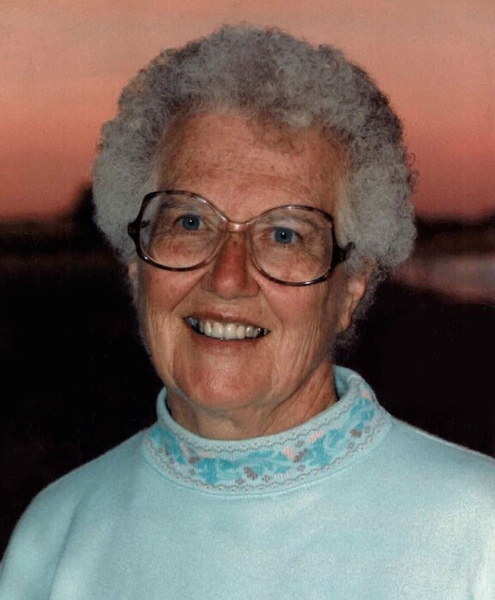 PLEASE NOTE THAT THIS OBITUARY HAS BEEN PLACED ON OUR WEBSITE AS A COURTESY TO THE BLAINE FAMILY.  HULLINGER MORTUARY IS NOT HANDLING THESE SERVICES.    Larene's graveside has been moved to the end of October.  Please check back for time and date.

Beloved wife & mother, Larene Rowley Blaine, age 100, passed away peacefully from natural causes in the home and company of her son, Scott and his family, the morning of May 21, 2020.  Born on December 13, 1919 in Oakley, Idaho to Wilford Marion Rowley and Julia Irene Hardy, she was preceded in death by her husband, John Hardy Blaine, her oldest daughter, Mary, and her great granddaughter, Abby Flematakis.
Larene grew up in Salt Lake City, UT.  Her childhood was a constant struggle to overcome poverty and the hardships of life during the Great Depression.  Her formative years were documented in her autobiography, Backtracks, in which she writes about a Cinderella-like childhood.  She was the oldest daughter of five siblings.  Her father struggled to find any work for many years.  Larene had to do almost all the housework as her mother became increasingly disabled and died in Larene’s senior year of high school.  Larene’s lifeline through her difficult childhood was education. Her goal was to go to college and become a writer. Because of her love of learning and hard work, she earned a scholarship to the University of Utah, which enabled her to pursue her education.
At the U, she majored in education with a minor in Spanish. In her junior year she met her future husband, John, from Myton, UT.  They were married on June 20, 1940, and later solemnized in the Salt Lake Temple.
After graduating with a BA in education, Larene and John settled down in the Uintah Basin for the next 20 years where she raised her six children and taught school at Myton and Roosevelt elementary schools full time.  In 1961, she moved with her family back to Salt Lake City where she continued to raise her children.  She taught at Uintah elementary and Lincoln junior high schools until she retired in 1982.  In her spare time, she wrote frequently and managed to get her Master’s Degree in comparative literature.  After retirement, she got a PhD in French literature, just for fun.  As an expert on the French poet, St-John Perse, she was a featured lecturer at conferences around the world in honor of the poet.
After returning home from serving an LDS mission in Quebec, Canada from 1987-88, she focused on her life-long dream of becoming a writer.  She published three books, Backtracks,  Wagons and Wives, a historical novel, & Simple Things, a collection of poems and short stories.
After twelve years of living at independent and assisted living facilities, she moved to Fremont, CA to live with her youngest son, Scott and his family.  At her 100th birthday party, Scott requested she tell the story in her book, about her first prize-winning poem.  She astonished the crowd by reciting word for word, “Why I Like Mincemeat.”  She was only nine years old at the time. After 91 years she could still vividly remember the story and every word of the poem. Her beautiful mind and how selflessly she used it to bless others with her knowledge and loving demeanor, will always be remembered.
Larene is survived by her children, Dianne Hardy, Sherry Griffith, Connie Blaine, David Blaine, Scott Blaine, 14 grandchildren, 23 great grandchildren, and 6 great, great grandchildren.
A memorial service for family and friends will be held in her honor and memory at Wasatch Lawn Memorial Park in Salt Lake City, UT, date is undetermined, but will be near the end of October.  Please check back for more information.

To order memorial trees or send flowers to the family in memory of Larene Blaine, please visit our flower store.