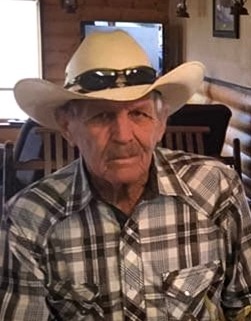 Kenneth Ray Aman, age 78, of Hanna passed away July 5, 2019, at his home with members of his family by his side, from congestive heart failure.
Ken was born May 28, 1941 in Nampa, Idaho to Loy Denzil and Mae Glenore Dalton Aman.  He graduated in 1959.  He joined the US Air Force from 1961 to 1965. He traveled and saw many new places.  It was in the military that he received his High Voltage Power Certificate.  After the service he worked many construction jobs in Idaho, Colorado, Utah and Nevada.  He retired in 2013 from the Jordanelle Water Service District.
Ken traveled the world but called Hanna his home.  He married Norma Curry February 21, 1985.  He was previously married to Darlene Nesmith, they were divorced.
Ken enjoyed being outside.  He loved to work with horses.  He had an amazing talent.  He could fix anything and was always happy to help neighbors and friends.
Ken is survived by his loving wife of 34 years, Norma, of Hanna; children, Debbie (Tracy) Hatch, Randolph; Sherrie (Hugh) Alexander, Kelowna, Canada; Wade (Rebecca) Rhoades, St. George; Jamie Rhoades, Hanna;  Sandra (Adam) Short, San Tan Valley, Arizona; Cody (Danielle) Rhoades, Herriman; Karen (Paul) Burgess, Moroni; 21 grandchildren, 7 great-grandchildren with another on the way; a brother Leon (Connie) Aman, sister-in-law, Patti Aman, both of Nampa, Idaho; mother-in-law Vivian Curry; brothers-in-law Oran (Becky) Curry; David (Elaine) Curry; Doug (Penny) Curry; Bruce Curry and many nieces, nephews and cousins, and his faithful furry companion, Annie.
He was preceded in death by his son, Kenneth Ray Aman, Jr.; brothers, Donald Aman and Ronald Aman; his parents; father-in-law, Joe Curry; and a nephew Anthony Aman.
Funeral services will be held on Wednesday, July 10, 2019, at 12:00 noon, at the Tabiona Chapel of the Church of Jesus Christ of Latter-Day Saints where a viewing will be held on Tuesday from 6-8 p.m. and on Wednesday from 10-11:30 a.m.
Burial will be in the Tabiona Cemetery with military honors presented by the Duchesne American Legion and the Patriot Guard Riders.
Condolences may be shared at www.hullingermortuary.com
A special "Thank You!" to Lori Teem, Teem Family Clinic, University of Utah Cardio-Vascular, Hope Lodge, Wound Clinic in Roosevelt, and the Tabiona Ward.

To order memorial trees or send flowers to the family in memory of Kenneth Ray Aman, please visit our flower store.