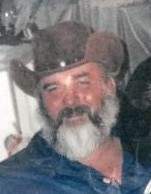 Herbert Kenneth Holcomb, age 63, better known as “Bear” on the rigs passed away on July 4, 2019 at the VA Hospital in Salt Lake City.
Ken was born on January 2, 1956 in Richwood, West Virginia to John P. And Bertha Ann Workman Holcomb.
He served in the US Navy from June 26, 1975 to June 27, 1979, stationed on the aircraft carrier, Saratoga, during the Vietnam War.  He was honorably released from the Navy on June 27, 1981.
He moved to Utah and met Mary Louise Payne.  They married on December 3, 1999.  Mary and Ken moved from Independence, Utah to Arkansas to continue working on the rigs.  He was diagnosed with cancer in his lungs in 2013.  After being diagnosed they removed his lung.  They then moved from Arkansas to California to help Mary’s mom.  Later they moved to Bluebell.  He was then diagnosed with cancer throughout his body.
He was a wonderful person with an unique personality.  He was very loyal to anyone who he called a friend and was always willing to help.  He was hard working and loved to hunt and keep busy.  He was talented with his hands and made many things through the years.
He is survived by his wife, Mary Holcomb, Bluebell; his children, Kenneth Holcomb, Gina (Charles) Cogis, grandchildren, Kasey & Shane; siblings, Lawrence (Louise) Holcomb, Marie Butler; Donald “Bud” (Patty) Holcomb; and Anne Holcomb.
He was preceded in death by his parents and sister, June Westfall.
Funeral services held on Monday, July 8, 2019 at 11:00 a.m. at the Altamont Stake Center of the Church of Jesus Christ of Latter-Day Saints.  A viewing will be held 1 hour prior to the service.
Burial in the Bluebell Cemetery with military honors presented by the Altamont American Legion and the Patriot Guard Riders.

To order memorial trees or send flowers to the family in memory of Ken "Bear" Holcomb, please visit our flower store.