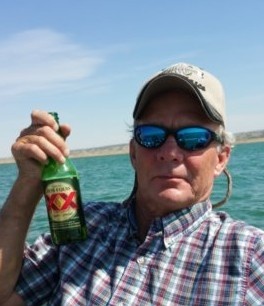 Keith Alan Chapman, age 65, of Littlefield, Arizona, formerly of Roosevelt, was called home July 31, 2018, from the Utah Valley Hospital surrounded by his family.
He was born December 13, 1951, in Hoisington, Kansas to Kenneth M. And Carolyn Jean Dancey Chapman.  He married Susan Dawn Miller on September 25, 1982, in Duchesne.
Keith went to work in the oil and gas industry at age 18 and retired in 2015.
He was an avid fisherman who loved to be in the water.  He spent many years golfing and would never turn down a cold beer.  For many years he played baseball, and  coached and played softball.  He was a die-hard Steelers fan and when they lost he would take his frustration out by cutting down trees, so many trees suffered at the hands of the Steelers.
Keith is survived by his wife Susan, of Arizona; his children, Tony (Kendra) Muir, Erda; Jared (Cheree) Chapman, Payson; Robyn (Craig) Lance, Farmington, NM; Michelle Chapman (Brian Bakas), Nephi; Brandy (Chris) Talbot, England; Hillary Hamlin, Fruitland; 16 grandchildren, and 1.5 great-grandchildren; brother, David (Kathy) Chapman, and a sister-in-law, Beverly Chapman.
He was preceded in death by his parents; a grandson, Kaeden Ryan Rich; brother-in-law, Bill “Buff” Miller; and father-in-law, Earl Miller.
Per his request there will be no funeral or other services.  He chose to go quietly.

To order memorial trees or send flowers to the family in memory of Keith Alan Chapman, please visit our flower store.