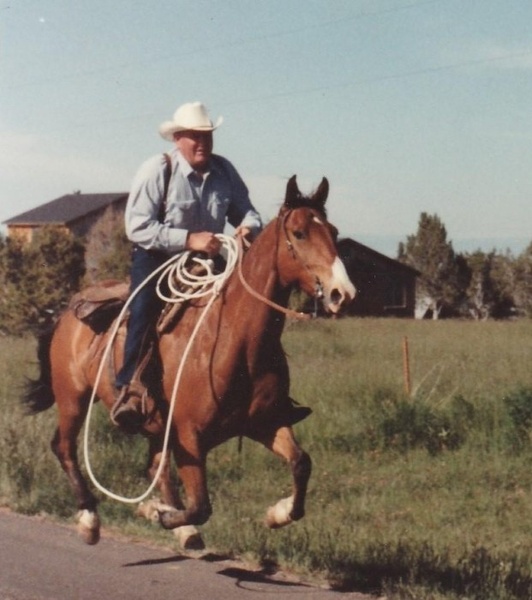 Keith Bastian, age 82, of Vernal, loving husband, brother, father, grandfather, and  great-grandfather, passed away peacefully in his sleep January 8, 2019 in Riverton, Utah.
He is the son of Wesley and Virgie Marx Bastian. He was born August 9, 1936 in Roosevelt.  He graduated from Union High School. He worked in the oilfield in his younger years.  He married Wanda Mitchell on February 4, 1958. Their marriage was later solemnized in the Provo Temple on March 8, 1986.  She died September 4, 2015.
Keith was a dedicated, hard working rancher. He loved to square dance, Keith and Wanda traveled to many dances across the state. He was a team roper, calf roper and trained many horses. He was awarded Rancher of The Year. He served as the Whiterocks Branch President for nine years. He served as a temple worker in the Vernal Temple since opening day. He adored his children, grandchildren and great grandchildren and will be dearly missed..
He is survived by his son,  Karl Bastian, daughter, Betty Jo Bastian, six grandchildren, ten great-grandchildren, siblings, Colene Gardner, Elvin (JoAnn) Bastian, Connie (Neil) Duncan, and Karen (Richard) Brough.
He was preceded in death by his wife, Wanda Bastian, his parents, siblings, Gordon Bastian, Elvin Bastian, and brother-in-law, Lynn Gardner.
Funeral Services will be held on Monday, January 14, 2019 at 11:00a.m. at the Neola LDS Chapel. Viewings will be held on Sunday evening at the Hullinger Mortuary from 5:00 -7:00 p.m. and Monday at the church one hour prior to the service.
Burial in the Hayden Cemetery.

To order memorial trees or send flowers to the family in memory of Keith Bastian, please visit our flower store.