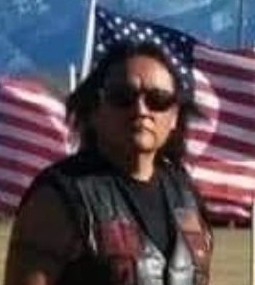 Kee Zahne, age 69, of Ft. Duchesne, passed away January 18, 2022, at the University of Utah Hospital in Salt Lake City.
He was born July 15, 1952, in Tuba City, Arizona, to Ben and Romana Jean Sellers Zahne.
Kee served in the United States Air Force during the Vietnam War as a Master Sergeant with para rescue and special survival skills.
He married Patricia Evans, and they later divorced. He married May Marie Arrowchis on November 3, 2011, in Ft. Duchesne.
Kee worked at Chevron oil and gas refinery. He was a talented craftsman making Kachina Dolls. He enjoyed riding his Harley Davidson, fishing, hunting, traveling, gardening, camping, taking his boat out on the lake, watching westerns, trying new things, listening to old county music, his favorite all time music was CCR. He loved to cook, take long drives and be in nature, which is one of the reasons he retired to the U & O Reservation, where he could observe wildlife from his backyard: buffalo, bear, elk, deer and mountain goats.
He sang in a band in his younger years, was musically inclined, with the guitar being his preferred instrument, and liked playing along with his grandkids.
He was proud to be a Native American and practiced traditional ways. He had a great sense of humor and liked to tease and joke around. He had a very outgoing personality and could strike up a conversation with anyone. He loved his family and liked spending time with them.
Kee is survived by his wife, May Marie, of Ft. Duchesne; his children, Marcus, Sahja, Tara (Thayne) Heninger, Sherry (Jose) Beach, Sharon (Justin) Larsen, Jared, Joel, Alyssa, & Jason Zahne; mother, Jean Zahne; step-children, ShawNee (KC McCook) Arrowchis and Cody Arrowchis Taveapont, granddaughter, who lived with them, Lloydie Arrowchis-Wissiup, his sunshine, Joycie, his grandchildren and great grandchildren. Siblings, Geneva Zahne, Arlene Zahne, Herbert Zahne, Geraldine Bedoni, Darrel Zahne; and numerous nieces, nephews, aunts, uncles, and other relatives.
He was preceded in death by his father, Ben and brothers. .
Funeral services will be held on Monday, January 24, 2022, at 10:00 a.m. at his home in Ft. Duchesne (8386 2000 N). He will be taken home on Sunday at 3:00 p.m. for a wake.
Burial will be in the Neola Cemetery with military honors and under the direction of the Hullinger Mortuary.

To order memorial trees or send flowers to the family in memory of Kee Zahne, please visit our flower store.