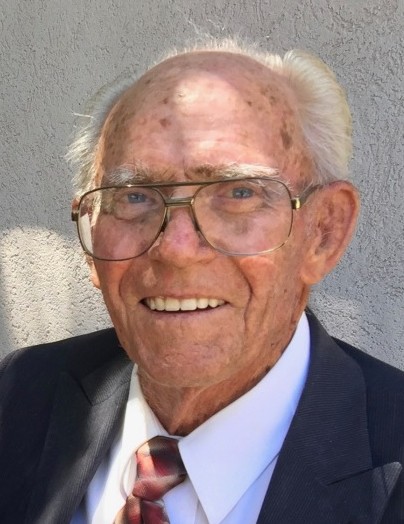 Joseph Junior Hicks, age 92, passed away on Sunday, June 7, 2020, at his home in Roosevelt, Utah.
Junior, who was considered a legend by many, was born to Joseph John Hicks Jr. and Hope Ione Labrum in Cedarview, Utah, on June 19, 1927.  From that day on, Junior's natural curiosity fueled a unique blend of talents, interests and abilities that have made the world a better place.
Junior attended school at Ioka and Roosevelt Elementary and graduated from Roosevelt High School in 1945. Upon graduating from high school, Junior immediately enlisted in the U.S. Navy at the end of World War II and was stationed at naval bases in San Diego and Treasure Island, California. He was also a crew member on the USS Protector.
In 1947, Junior enrolled at BYU and graduated with a bachelor's degree in secondary education with a minor in physics and science. He taught for 33 years at Alterra High School and West Junior High in Uintah County creating many lasting relationships with students and faculty. He was well known for a most exceptional science classroom that contained unique displays of electrical gadgets, minerals, fossils, biological specimens and many hands-on learning marvels.
During the time he was teaching school at Alterra he met Janeil Smith and wanted to impress her. For their first date, Junior picked up Janeil in his 1947 red Willy's jeep, drove her to the Roosevelt airport and took her up on a thrilling flight in his private plane. Other dates followed and they were eventually married in the Salt Lake Temple in 1955.
In addition to teaching, Junior developed a thriving business as an electrical contractor. Well known for driving his iconic red and white electric utility truck, Junior provided electrical contracting services for Basin businesses and residents for more than 65 years.  Although he never advertised, he never lacked for business. For many years, Junior enjoyed working with his friend and partner Morlin Buchanan. Junior earned his Master Electrician license at an early age and renewed his license regularly with the state of Utah until he officially retired at age 90. Throughout his long career as an electrician he often provided many "no-charge" service calls for people in need.
Junior's first interest in electrical work began in his teenage years when he electrified a clothesline to see the effect it would have upon his sisters when hanging out the damp laundry.
He had a fond interest in mineral prospecting and aviation. He earned his pilot's license and paid for his first private airplane by selling the uranium claims he established in Southern Utah. Throughout his life he maintained a compelling curiosity for gold and silver prospecting and for researching and exploring historic Spanish mines.
He also had a great interest in astronomy, lapidary work, fossils, petroglyphs, Native American history and local lore. His unbounded love and enthusiasm for learning was contagious.
Junior had a passion for UFOs and unexplained phenomena. He documented at least 400 UFO sightings from residents in the Uintah Basin and was the principle contributor and source for the book, "The Utah UFO Display," by Frank Salisbury. He gave numerous interviews and presentations on this subject.
Junior was a faithful member of The Church of Jesus Christ of Latter-day Saints and willingly shared his wonderful talents in many ways. He devoted his time to numerous church responsibilities such as regional welfare coordinator, bishopric member, High Priest quorum leader, stake clerk, temple worker, Cub Scout leader and Primary teacher. He was a faithful home teacher and magnified his callings to the best of his ability.
Above all, he was a kind and patient man to his family who will miss him immensely.
He is survived by his wife, Janeil Hicks, children, Joseph Ward (Peggy) Hicks, Sherlyn (Cliff)  Olsenand Janilee  (Russell) Griffin, seven grandchildren and seven great-grandchildren, siblings, Faun Allen, Bill  (Dorthella) Durfey and Connie (Don) Durfey.
He was preceded in death by his parents, an infant brother, and sisters Lulu Richins, Marva Deans and Cloe Brough.
Funeral Services will be held on Friday, June 12, at 11 a.m. at The Church of Jesus Christ of Latter-day Saints Roosevelt Stake Center, 447 East, Lagoon Street. Prior to the funeral there will visitation from 9:30 a.m. to 10:45 a.m. at the Stake Center.
Interment will be at Roosevelt Memorial Park with Military Honors. Please practice social distancing

To order memorial trees or send flowers to the family in memory of Junior Hicks, please visit our flower store.